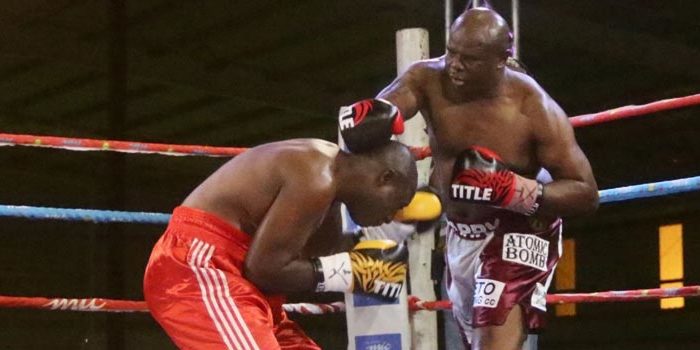 Write him off at your own peril, Namibia’s undisputed boxing king, Harry “The Terminator” Simon, is back with a bang.

Having been written off as has been in local boxing circles, the Walvis-Bay born former world champion seems to have lost none of his usual nostalgia and was reminiscent of the adorable professional boxer who conquered the boxing world with distinction.

Now in the twilight of his spotless boxing career, 44 years old to be precise, Simon took boxing enthusiasts down memory lane with great footwork punctuated by amazing confidence as he took the fight to his opponent from the opening whistle.

Simon added another accolade to his already fun filled illustrious boxing career when he sent Tanzanian opponent Kaminja Ramadhani Shabani to slumber land with his trademark vicious left hook at the Ramatex Complex, on the outskirts of Namibia’s commercial capital Windhoek, last weekend.

Harry Simon Onkungo Promotions hosted the boxing bonanza, themed ‘Second Chance’ Boxing Bonanza and the host did not disappoint as he floored his adversary to swell his squeaky clean record to 31 victories from the same number of bouts since joining the paying ranks in the 90’s.

Simon was his usual self and went about his business unhindered on the night with his opponent offering very little resistance, if any. The East African boxer found himself on the back foot as the Namibian swung a vicious left hook that dizzied him to require medical attention – less than one minute into the contest.

Simon’s elder son Harry Junior was not to be outdone either as he obliged by returning the compliment to his old man in astonishing fashion. The young boxer went face to face with Zimbabwean challenger – rewriting history where a father and son have fought on the same card.

Despite his fairly young age, Simon Jr nowdays under the care of Namibia’s internationally acclaimed boxing trainer Nestor “Sunshine” Tobias, had the better of the exchanges as he defeated veteran Zimbabwean opponent Meshack Kondwani.

The youngster displayed impressive skills as he easily outclassed his more experienced opponent, obliging the referee to abbreviate the contest to spare the out of sorts more blushes after two minutes and 13 seconds of trading leather.

The bulky Namibian who came into the fight hopelessly over the permitted weight limit – weighing eight kilogrammes (kg) more than his opponent, showed little excitement with both boxers wrestling most of the time instead of exchanging blows.

Meroro weighed 102.4 kg while Ajibu weighed 93.65 kg – changing the fight to Catch Weight instead of the Cruiserweight that Meroro normally fights in. Despite the weight issue, Meroro won the fight 79-73, 77-55 and 77-55 after eight rounds of boxing.