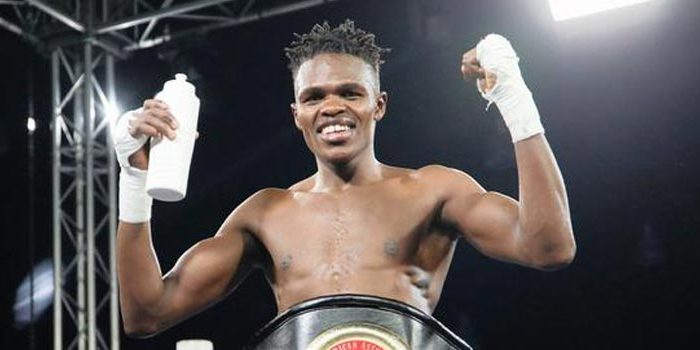 HAS South Africa’s Akani Phuzi, the defending WBA Pan African cruiserweight champion, bitten off more than he can chew?

Only time will tell as he makes his first title defence in the Fox Sports Africa Boxing tournament against Nigerian Afinni Abiodun over 12 rounds at Sibaya Casino & Entertainment Centre tonight.

Phuzi is a big and brutal hitter of the body and would want to finish off the Nigerian early in the fight. But he has been warned by his manager-trainer, Alan Toweel, that he has to be very careful of the Nigerian.

“Abiodun has a big right and scores heavily with his right jab as well. That’s what worries me and I’ve warned Akani about it. He often goes on the attack and leaves himself open to a right punch,” Toweel said.

The experienced Toweel has told Phuzi to take things in his stride before increasing his work rate instead of going all out from the first bell.

“Both fighters have a similar record – Akani has a 6-0 record while Abiodun has won six and drawn once. We know he can punch – he has a big right – and it would be foolish to start banging away from the opening bell,” he said.

“What Akani needs to do is pace himself and he could get on top of his opponent in that manner. He needs to start slowly and finish with a flourish. I’m looking forward to a good contest.”

Steven Bagwasi of Botswana hopes to return to Gaborone tomorrow with the WBA Pan African lightweight belt around his waist.

The 24-year-old will meet South African Ayanda Nkosi, the reigning champion, over 12 rounds in what could be an exciting fight as both are come-forward fighters.

“It’s the biggest day of my career,” Bagwasi said soon after his arrival. “It’s taken a while for me to have a crack at the title but I presume one has to wait in a queue to eventually get to the top of the tree.

“I did all my training systematically and have done my ground work since turning professional early last year. I’m happy to have waited for this day and have studied Ayanda’s style well as I go into this big fight of my life.”

Nkosi won the championship belt when he beat fellow South African Jeff Magagane on a split decision in October last year in Gaborone. In his first title defence he knocked out Cosmas Cheka of Tanzania in June this year.

Though he has done all his homework for his second title defence, he has had little to say going into yet another big day of his career which began in April 2014.

“I know I’m the champion and all I want to say is that the belt belongs to me. Steven (Bagwasi) will have a real fight to take it away from me. I’ve worked hard in the gym over the past few weeks and feel confident going into tonight’s fight. It will be a battle – I’m ready for the full 12 rounds,” Nkosi said.

The champion, who fights out of the Vusi Malinga stable, has had 10 fights with one loss on his record. His only loss came against Thembani Hobyani in a non-title fight at the Pressley Night Club in Pretoria in June 2014.

He has not looked back since and Malinga believes that he is going in the right direction in his career.

Included on the seven-fight bill is a four round heavyweight clash between Wilhelm Nebe of South Africa and Malawi’s Gilson Jeputers. Both are making their professional debuts.