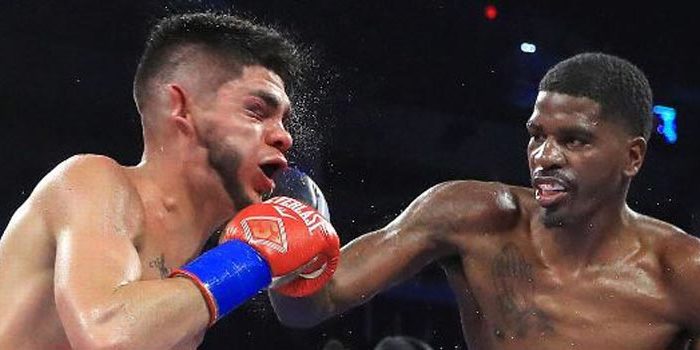 Hooker, in the hometown of mandatory challenger Alex Saucedo, survived a hard knockdown in the second round and came back to stop Saucedo in the seventh of a wild, action-packed fight as he retained his 140-pound belt for the first time before 4,102 at Chesapeake Energy Arena.

“I knew the first couple of rounds would be tough, but eventually it would be my time to take over,” Hooker said. “I have nothing but respect for Alex. He’s a warrior.”

Hooker won his belt on the road in Manchester, England, on June 9, when he traveled to Terry Flanagan’s hometown and won a split decision over the former lightweight titlist to claim the vacant belt.

Welterweight contender Egidijus Kavaliauskas overcame a cut over his right eye to stop Roberto Arriaza in Round 3 in the main event of a Top Rank on ESPN card Friday night in Oklahoma. He wants titleholder Terence Crawford next.

Now Hooker, who embraced fighting on the road again during the buildup to the fight with Saucedo, is 2-0 in back-to-back world title fights in enemy territory. This one was far more definitive than the bout in June, as he stormed back to stop Saucedo, whom he used to spar with when the two turned pro in 2011.

“Great fight. What a performance,” said Matchroom Boxing promoter Eddie Hearn, who co-promotes Hooker with Roc Nation Sports. “The knockdown, he was stunned, but after that he was punch perfect.”

Saucedo, who grew up around the corner from Chesapeake Energy Arena and still calls the city home, was bidding to join former 1980s lightweight world titleholder Sean O’Grady — who was ringside — as the only fighters from Oklahoma City to win a world title. But Hooker snuffed out that dream in punishing style to reverse the fortunes of Saucedo in his previous fight.

In that bout, on June 30 at the same arena, Saucedo survived an intense fight of the year contender against Australia’s Lenny Zappavigna to stop him in the seventh round. This time he was the victim in the same round.

There was no feeling-out process at the opening bell. Instead, Hooker and Saucedo went right at each other, with Hooker, who had a significant reach advantage, firing his jab and Saucedo looking to get inside and pound away.

The action continued at a wild pace in the second round, but Saucedo (28-1, 18 KOs), 24, dominated. He nailed Hooker (25-0-3, 17 KOs), 29, of Dallas, with a right hand to the head and knocked him down. Hooker got up quickly, but he was hurt and Saucedo pounded him for most of the rest of the round, giving him a bloody nose. After the knockdown, Saucedo twisted Hooker’s head back with a right hand and landed a hard uppercut.

“I thought in the early rounds, when Alex had him in trouble, how he didn’t go to the body I don’t understand. But he didn’t, and the other kid rallied and took him out,” Top Rank promoter Bob Arum said of Saucedo. “I don’t want to take anything away from Hooker, but Alex has only himself to blame.

“I thought Hooker was very vulnerable early on, but he showed a big heart and he rallied, so all props to him. He’s a very good fighter.”

Hooker seemed to have shaken off the knockdown by the third round. He began to get in a groove with his long jab while also landing right hands and short punches inside as Saucedo bore in on him. Saucedo trapped Hooker on the ropes and kept him there for most of the fifth round and let his hands fly to the head and body. Hooker was covering up, but Saucedo was finding openings and landing his punches until he mounted an offensive burst in the final few seconds of the round to knock Saucedo off balance.

Hooker, who earned $1,218,750 to Saucedo’s $406,250 — both career-best paydays — had another strong round in the sixth, hammering Saucedo with many clean punches. By the time the round was over, Saucedo’s left eye was swelling and his face was marked up.

Hooker did not let up in the seventh round and punished Saucedo with right hands that rocked him. One of them badly staggered Saucedo, who nearly went down but instead fell into the ropes, and referee Mark Nelson ruled it a knockdown because they held him up.

But as soon as Nelson waved the fighters together again, Hooker was all over Saucedo. He lashed him with a series of clean punches that sent him into ropes on the other side of the ring until Nelson stopped the fight at 1 minute, 36 seconds, sending what had been an intense, raucous crowd into near silence.

“The cuts were bothering me. I couldn’t see out of my left eye, and that’s when he caught me,” Saucedo said. “He’s a champion for a reason. Now, I am going to rest, enjoy my family, and come back stronger. I gave it my very best in the ring.”

According to CompuBox punch statistics, Hooker landed 174 of 509 blows (34 percent), and Saucedo landed 133-of-486 (27 percent). It was a very close fight at the time of the stoppage, with Hooker leading 58-55 and 57-56 on two scorecards and Saucedo ahead 58-57 on the third. But Hooker got the knockout and will probably get a hometown fight in Dallas as a reward.

“Dallas here we come. I’d love to take him to Dallas,” Hearn said. “He’s boxed two fights in a row on the road. I’d like to see him have a homecoming. Have a nice defense early in the year, and then next summer we’re coming to take Jose Ramirez’s belt.”

Ramirez, who was ringside, boxes for Top Rank and was being lined up to fight Saucedo in a summer unification fight had Saucedo won. But Hooker is with Hearn and Roc Nation, and fights on streaming service DAZN. The only reason Hooker fought on the Top Rank Boxing on ESPN card was because Top Rank won the purse bid for the mandatory bout.

So how can Hearn make a Ramirez-Hooker fight given the political difficulties?

“Offer them a lot of money,” he said.