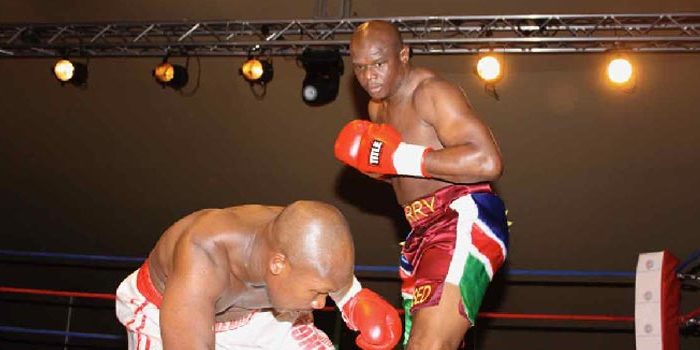 HARRY Simon knows he is treading on a tight rope with his legion of supporters and can ill-afford another bungled fight, his camp says.

The public has grown increasingly irritable at Simon’s empty comeback promises, following a series of ‘high-profile’ fights that were announced, but failed to materialize.

Most recently, Simon’s much-anticipated showdown with Vikapita Meroro fell through, with both fighters and the organizers giving conflicting reasons why the June showdown was called off, leading to a huge public outcry.

Simon and the organizers accused the Namibia Professional Boxing and Wrestling Control Board of derailing their plans over personal differences, while Meroro’s camp claimed that Simon had “chickened out” and opted for another fight against run-of-the-mill Tanzanian Kaminja Ramadhan Shabani.

The board has since rubber-stamped the upcoming bill, topped by the undefeated former middleweight world champion against Shabani, while Meroro will clash with Mussa Ajibu of Malawi on 24 November at the Ramatex complex.

“Tell the public that this is the last chance with Harry Simon’s fights, and there’s no way this event won’t happen. The control board gave the sanctioning letter, so we are on,” matchmaker Joseph ‘Smokey’ Hilongwa told The Namibian Sport.

With his popularity waning and his once fearsome prowess questionable, Simon has added his promising son Harry Simon Jr, whose opponent is yet to be announced, to the card in a bid to enhance the tournament’s appeal.

Simon Sr has not fought a noteworthy opponent since 2002 when he beat Armand Krajnc to win the World Boxing Organization middleweight world title, but maintains he still has what it takes to compete as an elite boxer.