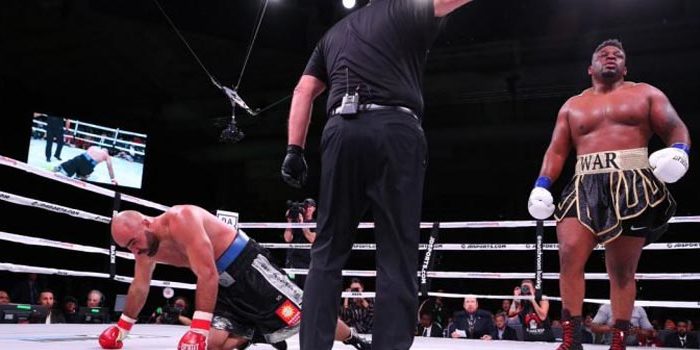 For Miller, a 30-year old native of Brooklyn, it was his third stoppage victory of the year, as he works his way toward a title shot.

Dinu, 32, was fairly effective in the first two rounds, circling the ring and landing jabs from the outside.

Miller fought at a measured pace early on but started to close the gap in the third round. He landed heavy body shots with both hands, which allowed him to enforce his size advantage. Dinu came in at a solid 237.4 pounds but was quickly overpowered by Miller, who weighed in at 315.25 pounds.

In the fourth round, Miller landed a crisp three-punch combination, punctuated by a left hook to the head that floored Dinu. Dinu was visibly dazed and was just able to beat the count of referee Bill Clancy at nine. But it was a short reprieve, as Dinu was knocked down again by a right hand from Miller. This time Dinu was unable to beat the count.

“He was getting winded once I started throwing body shots,” Miller said. “I had to get my footing down. I knew I would get him.”

Miller might not be the best heavyweight in the world, but he is among the heaviest, and despite criticism of his physical conditioning, he seems to function well at his weight. Like another heavyweight of the past, George Foreman, Miller has personality to go with his punch.

“I come to fight, and nothing was given to me,” he said. “Putting all the B.S. aside, I’ve been on my own since I was 17. I’m a fighter, and people think I’m 315 pounds and talk smack. I’m a lovable guy and eat cheeseburgers.”

A former kickboxer, Miller moves fluidly for his size and has surprising hand speed. The question is how he would compete at the upper echelon of the heavyweight division, against the likes of Anthony Joshua, who holds the WBA, IBF and WBO titles, and Deontay Wilder, the current WBC champion.

“We’re looking at a few fight, talking to my team and Eddie [Hearn] on what’s next,” Miller said. “We want A.J., but he’s busy. Let Trevor Bryan pick up the phone, and I’ll beat his butt, too. I think it’s time I knock out a Brit.”