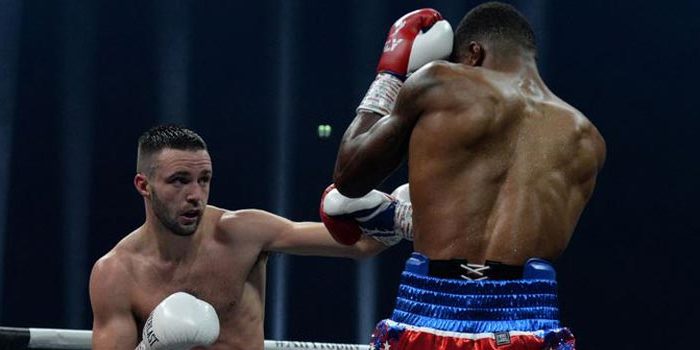 Taylor dominated Martin before their scheduled 12-round fight ended once Taylor landed an illegal left hand to the back of Martin’s head in the seventh round Saturday night. That shot sent Martin into the ropes and eventually to the canvas.

Referee Victor Loughlin quickly jumped in to wave a halt to the action at SSE Hydro in Glasgow, Scotland. Martin complained about Taylor hitting him on the back of his head, but Martin hadn’t made their fight competitive prior to the stoppage at 2:21 of the seventh round.

Scotland’s Taylor, the No. 2 seed in the World Boxing Super Series’ 140-pound tournament, improved to 14-0 and recorded his 12th knockout against the previously unbeaten Martin.

“I told you, nobody’s beating me in this Hydro, man,” Taylor said. “These fans are amazing, best in the world. So thanks, everybody, for coming out.

A cut opened over Martin’s right eye in the seventh round, when Taylor mostly picked him apart with punishing punches to the body and head.

Martin tried trading with Taylor from the inside in the first half of the sixth round. He didn’t have much success, as Taylor kept touching Martin to the body.

Taylor was so dominant during the first four rounds, Abel Sanchez, Martin’s trainer, asked him following the fourth round if Martin wanted the fight stopped.

Martin tried to get punches off early in the fifth round. Taylor’s firm commitment to body punches neutralized Martin’s aggression, though, and he landed enough lefts up top to cause swelling over Martin’s right eye.

Martin was aggressive early in the fourth round, but Taylor slowed him down again with his relentless body attack. After throwing multiple combinations to the body, Taylor hammered Martin with separate vicious rights to Martin’s body in the final minute of that fourth round.

Martin nailed Taylor with a straight right hand just after the midway mark of the third round. Taylor fired back with a left-right combination to Martin’s body.

Taylor attacked Martin’s body later in the third round as well. All those body shots made Martin reluctant to throw punches.

Martin also shook his arms several times in the second round, indicating that he wasn’t loose.

The Taylor-Martin match got off to a slow start. Taylor threw many more punches during the first round, but Martin managed to block a lot of those shots, particularly Taylor’s attempts to his head.

Taylor did land multiple punches to Martin’s body in those first three minutes, though.