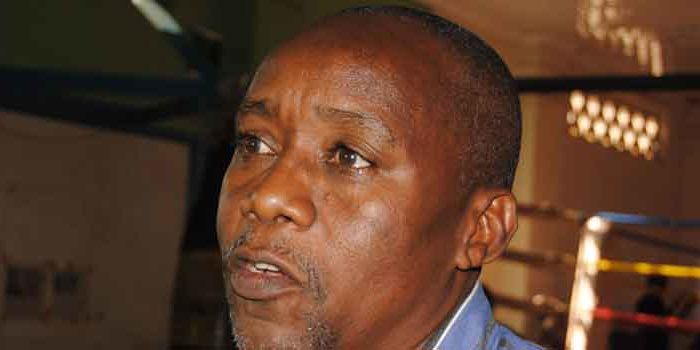 Boxing Association of Kenya (BAK) President John Kameta has warned that Kenya is on verge of suspension by the International Boxing Association should the current consistence government interference continue unchecked.

Speaking in Mwingi during the fourth leg of the Boxing National league, Kameta revealed he had written to AIBA detailing how the Government has consistently interfered with the operations of the federation.

The BAK boss alleged that Sports Cabinet Secretary Rashid Echesa is actively trying to split the boxing league after the latter was accused of organizing a parallel fourth leg in Kakamega against the federation calendar.

“Our ban from AIBA is imminent if the Government will not stop interfering with federations plans. After his request to have 4th leg league be staged at Kakamega rejected, Echesa imposed some suspended boxing leaders and mandated them to organize the split league at Kakamega hence splitting the league down the middle.

“No points will count for those who played their fourth leg in Kakamega because it was against federation’s calendar of events,” visibly agitated Kameta told Citizen Digital.

Multiple National league Champions Kenya police is one of the teams which missed out at the Mwingi 4th leg and who played in the parallel leg at Kakamega.

At the same time, Police arch-rivals Kenya Prisons will be declared champions if they win the fifth leg after the latter posted their second straight overall win in the three day event in Mwingi.

The warders who finished behind KDF and Police in last year’s standings took advantage of the absence of the latter to collect 23 points to sit on top of the log.

Welter weight bout between Vincent Ouma of Kentrack and Benjamin Mwangangi of Kenya Prisons was the most exciting encounter of the day which made everyone stand on their feet’s cheering heartily as the two experienced pugilists engaged each other on the rig.

Mwangangi won via split point’s decision. That was the third time Mwangangi was winning in the boxing league final against Vincent Ouma.

In the light heavy weight bout between KDF’s Heziron Maganga against Kentrack’s Francis Ndegwa was another warlike bout as both boxers made their organized boxing engagement looks like a street fight. Hezron Maganga won the fight.

The 4th leg boxing league finals started with a walk over which was awarded to Daniel Okoth of prisons in the supper heavy weight category.