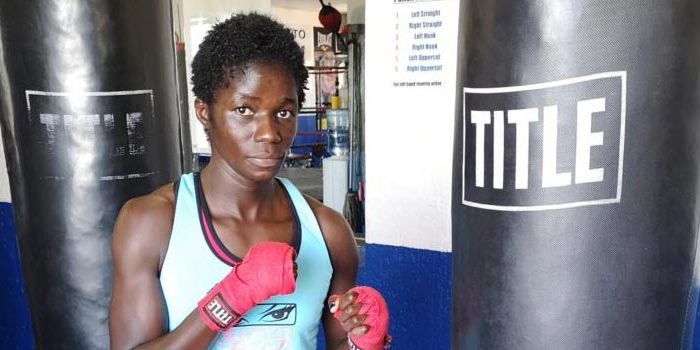 Undefeated Fraser, 30, will bid for the vacant Commonwealth title against Simwaka at the DoubleTree by Hilton Aberdeen Treetops Hotel on Saturday November 24.

Born in Malawi but now based in South Africa, Simwaka’s last fight was for the WBF World title in August this year, where she lost on a points decision to Bukiwe Nonina.

The 21-year-old, who boasts a record of seven wins (five by KO), four defeats and two draws, is determined to return to winning ways in the ring by lifting the Commonwealth belt.

Speaking to the Evening Express from her training camp near Johannesburg, Simwaka said: “I want to tell Kristen Fraser that I am coming for her in Aberdeen.

“I have been given the chance to fight for a Commonwealth title and I am very happy about that.

“That Commonwealth title belt is mine, they are just keeping it for me until I win it in Scotland.

“I have already won the World Boxing Federation International title that came by knocking out my opponent.

“Also, I have fought for the WBF belt. Now I am ready to secure the Commonwealth title.”

Simwaka has been training at the renowned Topbox gym in Northern Sandton, north of Johannesburg.

She won the WBF International title in June this year with a seventh-round stoppage of Simangele Hadebe at the Turfontein Race Course, Johannesburg, in July.

It was the third time Simwaka had faced Hadebe, with the previous bouts yielding a draw and loss for Simwaka before the Commonwealth title challenger finally triumphed. The first contest, a defeat to Hadebe, was nominated for the Female Fight of the Year 2017 Award in South Africa.

Northern Sporting Club star Fraser will be supported by a passionate home crowd in the Granite City fight.

Simwaka has fought in front of hostile crowds before and will not be fazed in the Granite City.

She said: “I am not worried about the crowd in Aberdeen. I don’t care about that.

“I am just going to Scotland for Kristen in the ring, not the crowd.

“This is my chance to win a Commonwealth title. I need that belt and aim to take it.

“I have never been to Scotland before, this will be my first time.

“I am hungry for that Commonwealth title and aim to leave Scotland with it.”

Born and raised in the Malawi capital of Lilongwe, Simwaka is determined to secure title glory for her country. She said: “They are proud of me in Malawi. I want to thank my manager, Stephen Castle, and my trainer for the support they are giving to me.

“Fighting for the Commonwealth title is a big opportunity for me and I aim to take it. I am preparing for all 10 rounds, however, if it is going to be a knock-out that would be good.

“However, I am preparing to go the distance if needed.

“I am training two times a day and am confident of beating Fraser.”