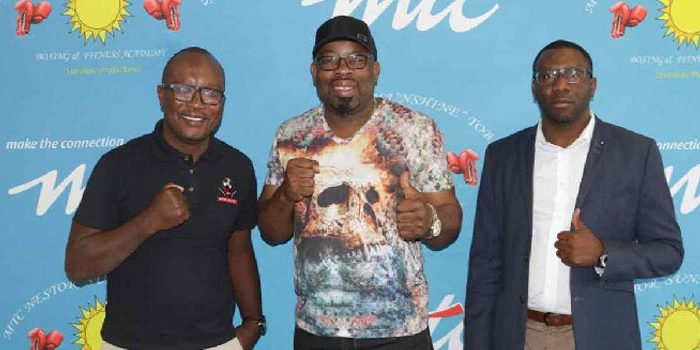 THE MTC Nestor Sunshine Academy will host a boxing fiesta at the end of November, with an international tournament that will coincide with the annual MTC Cup for Namibia’s top amateur boxers.

The ‘MTC Sunshine Boxing Fiesta’ will be hosted at the Windhoek Country Club on Friday, 30 November, with Namibia’s WBO Africa middleweight champion, Mika Shonena defending his title against Mfaume of Tanzania in the main bout.

Shonena is still unbeaten after 12 pro fights and is currently ranked ninth in the world by the World Boxing Organization. As such, he will start as a strong favorite against Mfaume who has a patchy record of 13 wins, four defeats and two draws.

The 26-year-old Mfaume has been more active than Shonena of late, though, having fought three times this year, although his last fight, last weekend, ended in a second-round technical knockout defeat to Vaghinak Tamrazyan of Russia.

Shonena, by contrast, has only fought once this year in March, when he beat another Tanzanian, Said Yazidu on a second round TKO.

Shonena said he was looking forward to the fight.

“I don’t know anything about my opponent, but I’ll be ready for him. I’ve been training for about a month now and I’ll step up my training from next week. It’s my dream to become a world champion and follow in the footsteps of Harry Simon, The Hitman Moses, Julius Indongo and Paulus Ambunda, so if I want to become the best, I must beat the best,” he said.

Some of the other fighters on the undercard include Onesmus Nekundi, Timoteus Shuulula, Max Ipinge and Charles Shimina, while several other boxers will be making their professional debuts.

The event is scheduled to start at 18h30 on 30 November while tickets are available at N$100 per person at the Boxing Control Board or from MTC Nestor Sunshine Academy.

The MTC Cup will see boxers from at least eight Namibian regions competing for honors over three days at an undisclosed venue.

The chairman of the Khomas Boxing Federation (KBF), Jason Naule said at least eight regions, including the Namibia Defence Force and Namibia Police would participate in the MTC Cup, while they will finalize a venue by next week.

“This is the sixth year that the MTC Cup will be held and the boxers are very excited and looking forward to the event. Last year the cup was held in Otjiwarongo when the Khomas region won it and we are confident that we will win it again. I think Erongo could be a challenge because they won the national championships, but we will make a plan,” he said.

The KBF will host the tournament in collaboration with the MTC Nestor Sunshine Academy, which will offer logistical and technical support.