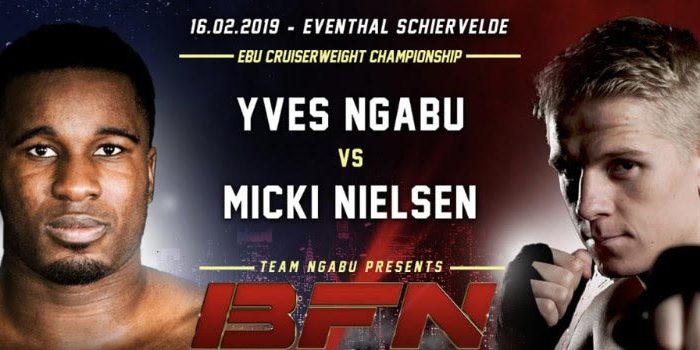 Micki Nielsen (25-1, 15 KOs) will challenge Yves Ngabu (19-0, 14 KOs) for the European Cruiserweight title on February 16 at the Eventhal Schiervelde in Roeselare, Belgium.

Nielsen has landed a golden opportunity to claim Euro glory having been named mandatory challenger for Ngabu’s belt, but can expect a tough task, travelling away from home to meet the undefeated champion in his backyard.

Ngabu claimed the European title with a fourth-round stoppage win over Tomas Ladi in April 2017, and recorded his first defence in similarly empathic fashion, forcing Geoffrey Battelo to retire in the third-round in January this year.

“I’m very happy to get the chance to fight for the European title,” said Nielsen. “This is a big opportunity for me and I will do everything possible to bring the belt home to Denmark.

“I know Ngabu is a tough fighter and a strong champion but I believe I can beat him. I’m not worried about going to Belgium and fighting in front of his supporters. A ring is a ring, and when the bell goes, it will be just me and him.

“I’ve never backed down from a challenge and I’ve never turned down a fight. Ngabu should be ready for war because that’s what I’m bringing!”

Promoter Nisse Sauerland is backing his fighter to get the job done in Belgium.

“Throughout his career, we’ve only seen glimpses of Micki’s true potential,” he says. “But on February 16, it’s his time to shine. Yves Ngabu is a good fighter but he’s never met anyone with Micki’s strength and ability before.”