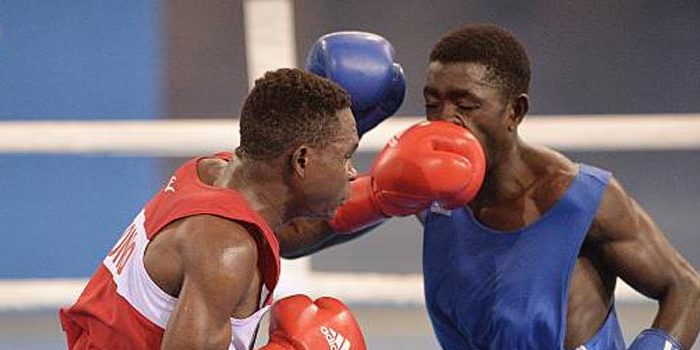 Ahead of the Tokyo 2020 Olympic Games, Nigeria has called for an urgent review of boxing officiating standards to sustain the credibility of the global sporting fiesta.

The minister of Youth and Sports Development, Solomon Dalung, who made the call during a meeting with Tokyo 2020 organisers in Tokyo, on Monday, lodged a strong protest against officiating standards particularly in boxing, which he noted is yet to conform to the standard in other Olympic Combat sports.

Dalung, who led a high-powered delegation including the President of the Nigeria Olympic Committee, (NOC), Habu Gumel and other NOC technical officials, warned of the risk to the credibility of the whole Olympics if member countries perceive that there’s no level playing field in certain sports because of subjective officiating standards.

“While other combat sports like taekwondo, karate, wrestling and judo have digitalised their scoring system with scoreboards showing real time scores, boxing is still maintaining a standard where individuals would whisper among themselves at the end of a bout and unilaterally declare a winner without any transparent system of scoring.

“How can there be fairness in such a situation when results are determined by the whims and caprices of individuals?” Dalung queried.

He cited the example of the Rio 2016 Olympics where a Nigerian boxer got several knock downs of his opponent in a bout only for the officials to whisper among themselves and declare the opponent winner thereby,attracting loud protests  even from spectators, adding that if the sport does not digitalize its scoring system at Tokyo 2020, then countries like Nigeria would be left with no option than to participate at nominal level knowing they have no medal prospects under such officiating standards, a scenario he said will not augur well for the credibility of the games.

Responding, the Executive Director International Relations of Tokyo 2020 Organizing Committee, Aki Murasato, noted Nigeria’s concerns and promised that the organisers will convey these observations to the International Boxing Federation, which sets such officiating standards in Boxing, while advising that the Nigeria Boxing Federation should similarly lodge a complaint with the world boxing body.