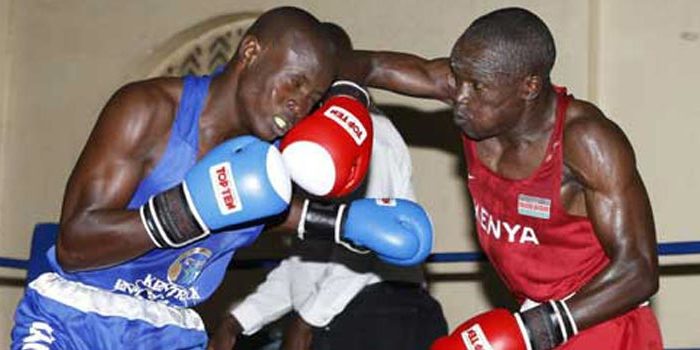 Okoth, a corporal in the army, expressed optimism ahead of the continental event, adding: “I’m going for nothing shot of gold.”

The soft-spoken boxer, who is also the 2015 All Africa Games lightweight bronze medallist in Brazzaville, Congo, said the team boxers have what it takes to rock their ring adversaries in the North African state.

“We have trained together as a team for a long time while some of us have the much needed experience with the national team. We anticipate some great action of boxing artistry,” said Okoth.

The team, which won the third leg of the BAK National League in Mombasa last month in Police’s absence, jets out to Algiers today.

Chef de mission, Colonel Jacob Ondieki, who recently received the flag from Assistant Chief of Defence Forces in charge of personnel and logistics, Major General, Fatma Ahmed, who presided over the hand-over ceremony for the KDF boxing team going to Algiers, will lead the team.

Major General Fatma, who is also the Chairperson of the Defence Forces Sports Control Board, appreciated the combined efforts of all key players including the Kenya Defence Forces Amateur Boxing Association (DEFABA), who have ensured theboxing team reached this far. The event will start this Saturday until November 10.

Chief of Defence Forces, General Samson Mwathethe lauded the team and urged them to do their best in Algiers.

“The Kenya Defence Forces teams over the years have performed well in regional, continental and international military games and, therefore, I urge you to ensure the trend of good performance is maintained as this will earn our country admiration and glory worldwide,” said General Mwathethe in a statement read on his behalf by Major General Fatma.

“As you interact with other organisations of military sports in Africa, I urge you to consider your personal safety and security at all times. Maintain high standards of discipline and uphold the image of KDF and that of our country at large,” the statement further said.

In her remarks, Major General Fatma assured the boxing team that the Defence Forces Sports Control Board will continue to vigorously support sporting disciplines particularly in training so as to acquire the necessary exposure.