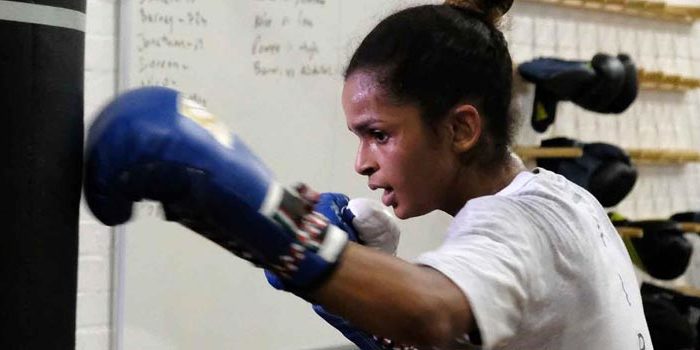 Ramla Ali doesn’t remember her birth date; neither does anyone in her family. All she has been told is it was at the start of the civil war in Somalia.

Capital Mogadishu was engulfed in strife when Ramla, barely two-years-old, and her family had to flee to Kenya on a boat. Her elder brother, aged 12, was killed when a shell hit him, right in front of their house. The family was lucky to survive a torturous 10-day boat journey while they saw many relatives starve to death. Ramla says her father, a fisherman, somehow managed to see his family through to safety. They lived in Kenya for a year, and were robbed of all belongings, before landing in England as refugees. Growing up in refugee camps, the young Ramla sought comfort in the boxing ring.

Despite the trauma the family suffered in Somalia, when Ramla’s mother discovered her daughter’s hidden passion, wanted her to represent her country of her birth and not the adopted homeland, England.

The World Championships starting here on Nov 15 thus will be special for Ramla and her family. She will be proudly competing under the Somalian flag, two years after being out of the competitive circuit and the hard work she and her husband-cum-coach Richard Moore had to put in to almost build the Somalia boxing federation from scratch and get the world body’s recognition.

That meant giving up a fruitful boxing career in England which she had pursued secretly for 10 years. Ramla, the first Muslim woman to win an English boxing title, knew that telling her mother meant the end of her boxing dreams.

“Boxing is all about support, having that family support. For me, not having that was very difficult. I knew my mum would not accept, being a Muslim and the fear of what the community would say,” she recalls.

“So, I lied when I travelled for tournaments. I would stop competing for some months for fear that my family would come to know and I would be asked to stop. But I loved boxing so much I thought it was worth a sacrifice.

“I knew my mum would be more proud if I play for Somalia, when she eventually found out.

“The last two years, I have done nothing internationally. All the other girls are progressing, and I am just still there. If I did really well here, it will show that those two years were worth waiting, competing for Somalia was worth it.”

In fact, that was the only way Ramla could have continued boxing, says husband Richard, who nurtured her talent.

“It looked daunting and impossible when we thought about it (to compete from Somalia). The federation was non-existent. But there were a couple of people in Mogadishu who were very supportive and they spoke to the Somalia Olympic Committee. A politician helped and media attention also helped.

“It is quite rare in East Africa, especially Somalia, for a female to be in sport. If you look all the continents, there are amazing role models, especially in boxing. In India you have Mary Kom, who is an icon. In Europe, you have Katie Taylor (Irish five-time world champion).”

Since switching nationality, Ramla is fast becoming a role model. “On instagram, I always get messages from young girls saying you are my inspiration. In this World Championships there are a lot of African countries, which is amazing. I am nobody, but in their eyes, I am somebody, so it’s an amazing feeling.”