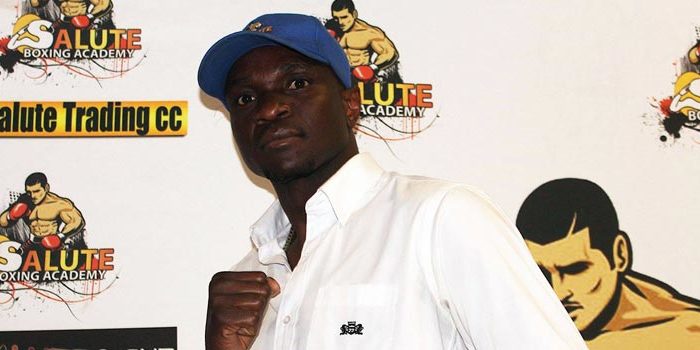 Lukas ‘The Demolisher’ Ndofoluma might not be as popular as other top local boxers such as Paulus Ambunda, Paulus Moses or Harry Simon, however, he is one of those rare talents ever to come out of Namibia.

Ndofoluma started boxing in 2001, when he was only 15 years old while still a student at Okatana Combined School, located north of Oshakati.

His break through only came in 2011 when he defeated fellow country man Steven Shimbonde.

At 32, Ndafoluma is in his prime although one might argue that at this age he should have been a world champion already.

Speaking to Windhoek Observer, Ndafoluma who boasts a record of 12 fights, 11 wins and one loss, is busy preparing himself for his non-title middleweight 10 rounds fight against Zimbabwean boxer Jimmy Mabundji scheduled for Harare on 30 November 2018.

The fight will be Ndafoluma’s fifth fight ever since he was signed up by South African based promotions Kalakoda Promotions last year.

He signed up with Kalakoda Promotions last year following a partnership agreement between Salute Boxing Promotions with whom he trains with ,aimed at giving local boxers more opportunities to fight.

His only loss came in 2014 against fellow compatriot and now retired boxer Pohamba ‘The President’ Mandume in a split decision in Windhoek.  Ndafoluma continues to cry foul regarding that loss after saying that he was robbed.

“Some people from Zimbabwe told me that Mabundji is a boxer that even if you hit him with a bricks he will always come forward as he is a rock. I then asked them back if Mabundji ever fought a real fighter like me. I am in the best shape of my career. I am going there to win.

“I turned professional very late in 2011 because I was unlucky not to get fights unlike other boxers who have been enjoying the financial sponsorship from MTC. Had I received lots of opportunities, I would gone further with boxing. That fight against Mandume was a daylight robbery!  I wanted a re-match against him but that was unfortunately the end of his boxing career,” Ndafoluma said.

Ndafoluma also said that boxing has changed his life in terms of survival even though he does not make lots of money from boxing.

“I do not have a car because it is not a necessity for me now. I take a taxi to the gym. You find some boxers buying cars, yet they do not have a place to stay. I have kids and siblings that I support. We all know that there is no money in boxing here in Namibia unless you are fighting for world titles. It is not that I cannot afford a car but I have other responsibilities to look after. I do not have other jobs as I live on boxing and I am not married,” Ndafoluma said.

Boxing came as a surpise to Ndafoluma, who wanted to become a footballer during his teen years when he was playing for Pascanova football club in the Oshana Region lower division.

His father played a big role in persuading him to become a boxer.  “I used to play in a left back position for Pascanova and when my father one day heard my name on the radio ,he came to me and asked me what I will gain from playing soccer as compared to boxing,” Ndafoluma said.

Last year November, he surprised everyone when he beat top ranked British boxer Craig Cunningham in a middleweight bout in England.

Cunningham lost the fight while he was a former World Boxing Council (WBC) International Middleweight Champion.

“I am not like other boxers in Namibia who make lots of noise when they win a fight. I beat Cunningham who is one of the best boxers in the world. My aim is to fight for a world title one day and do not be surprised if you see me fighting for a world title in two-year’ time,” Ndafoluma said.