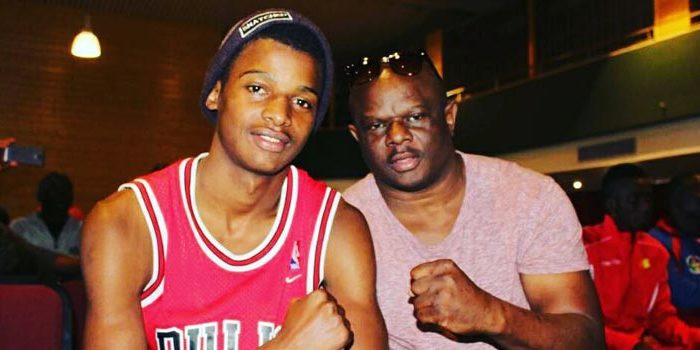 HARRY Simon has vowed to give a great performance when he takes on Kaminja Ramadhan of Tanzania at the Ramatex hall on Saturday night.

The fight, which is being promoted by Onkugo Promotions, is the main bout of a jam-packed program which will also see his son, Harry Simon Junior in action on the same bill – the first time that this will happen in Namibia.

“For those who doubt me and think that I am finished, all I can say is come and see for yourself on Saturday – I’m still the best,” Simon senior said on Wednesday.

Simon said he didn’t know anything about his opponent but was not in doubt about the outcome.

“The older you get, the smarter you become, so I’ve trained very smart for the fight. I don’t know anything about my opponent, but I’ll rough him up in the first round and try and knock him out as soon as possible. If he survives that I’ll just outbox him and beat him on points,” he said.

The 44-year-old Simon has not been very active of late, with only one fight in the last five years, and will be keen to get his career back on track.

Despite his inactivity and advancing years, he should start as a firm favorite against Ramadhan, who does not have a very inspiring record.

Simon is still unbeaten after 30 pro fights, but Ramadhan has a record of 12 wins, eight losses and one draw, and is also past his prime at 42 years of age.

Harry Simon Junior will also appear on the undercard and Simon senior said it will be a proud moment for him.

“It’s every father’s dream to fight on the same bill as his son and we’ll be making history, because it has never been done in Namibia,” he said.

It’s not a world first though, as the South African Frans Botha and his son Marcel fought on the same bill in New Zealand five years ago, but Simon said there was still a difference.

“Frans and his son have both been beaten, while we are still unbeaten – the difference is that they are talented, but we are gifted,” he said.

He said his son could go far but advised him to stay on the right track.

“He can go far in boxing, but he must remain humble and listen to advice, and he must stay away from bad influences,” he said.

Kondwani is already 44 years old and way past his prime. In fact, he has lost his last 15 fights and should not be a problem for the exciting Simon Junior, who has won his first six pro fights, of which four were via knockout.

Kondwani has been a regular visitor to Namibia where he has lost to, amongst others, Paulus Moses, Betuel Uushona, Julius Indongo and Albinus Felesianu.

One of his victors, Felesianu will also be in action on Saturday night when he takes on Limbani Chipaka of Malawi in a super lightweight fight over six rounds.

Felesianu, with a record of 17 wins, one draw and two defeats, has the edge in terms of experience but the young Malawian, who only made his pro debut two years ago, could be a tough opponent.

He lost his first pro fight, but then racked up seven consecutive victories, before losing his last fight to Clement Kamongo of the DRC on a sixth round TKO last year.

Another boxer who will be out to revive his career, Vikapita Meroro, who now has a record of 28 wins and seven defeats.

A former WBO Africa light heavyweight champion, Meroro’s career has taken a dive in recent years, after losing his last three fights in a row.

Meroro takes on the experienced Malawian, Mussa Ajibu, who has a patchy record of 28 wins, 11 losses and five draws.

Ajibu’s last four fights all ended in defeats, with his last one being a third-round technical knockout defeat against Namibia’s Wilbeforce Shihepo in April this year.

In a super welterweight fight, Hedison Nghipondoka takes on Ndadi Shapwa over four rounds; Samuel Nangolo takes on Salatiel Moses in a bantamweight fight; and Sacky Amutjaa takes on Rafael Iita in a super lightweight fight.

Four other boxers will be making their pro debuts, with Paulus Amavila taking on Immanuel Jason in a lightweight fight, while Teofilus Nashilongo takes on Paulus Aileka in a featherweight fight.

The tournament, which is being promoted by Harry Simon Onkugo Promotions, starts at 18h00 at Ramatex on Saturday with tickets available at N$300 for VIP tickets and N$100 for general tickets.

Tickets are available at Shoprite and Checkers stores throughout Namibia.