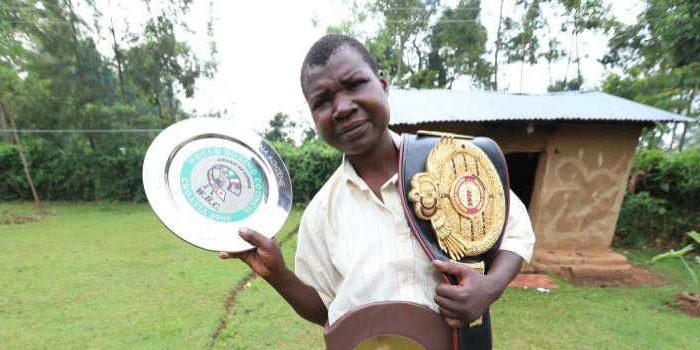 It was a day of high drama as well-wishers scrambled for ailing boxer Conjestina Achieng in yet another attempt to rehabilitate her.

Yesterday, Nairobi Governor Mike Sonko’s Rescue Team faced off with comedian Vincent Mutua, aka Chipukeezy, over the ex-boxing star whose video of her wasted self went viral on social media last week.

The set of well-wishers had landed in Kisumu in an umpteenth effort to rescue Conje from relapsed drug abuse. They clashed at the airport as Sonko’s group was leaving with Conje, but Chupukeezy insisted he was the one to fly with her.

“It is unfortunate that Sonko also had a plan to take her, but we are all in government so we hope he (Sonko) will take her to the rehabilitation centre proposed by NACADA because we understand it better,” Chipukeezy said.

The comedian is a National Authority for the Campaign Against Alcohol and Drug Abuse (NACADA) board member. Earlier in the day, Sonko’s emissaries, led by former Harambee Stars Captain Musa Otieno, descended on Conje’s Yala home with an offer for rehabilitation and later a job.

Get the latest World Cup news updates. Subscribe to our SMS sports service by texting ‘SPORTS’ to 22840.

It was not to be a walk in the park. Immediately the team got into the compound, Conje identified Otieno, recalled how they met in Cape Town, South Africa, during a tournament and mocked him:

“Look at my medals. What have you brought for Harambee Stars? Mlifail! (You failed). Where is the African Cup of Nations trophy?” she said while holding four medals she won during her time in the ring.

It would later turn out to be an hour-long drama trying to convince Conje to leave home for Nairobi. She said that more than once she had been duped that she is being taken for treatment only to be abandoned at Mathari Mental Hospital.

It took Winnie Augo Foundation Director Winnie Ogola and her Oryflame counterpart Shamim Chepkemoi to convince her the Nairobi journey was good for her. At the home, her mother Gertrude Auma was lost for words: “My hope has been to see my daughter regain her lost glory. I have done all I could,” she said.

Conjestina was last in hospital early this year when well-wishers from a local betting firm sponsored her treatment at a rehabilitation centre in Homa Bay County.

Ms Auma said after full payment was made for what was set to be a six-month therapy, the facility management kicked Conje out for what they termed “aggression that threatened other clients”.

Conje’s brother William Ochieng was summoned to pick her up three months into her session, with no take-home medication or follow up.

“From that time we have never seen peace in this home. She has sunk into terrible drug abuse,” said Auma.

When the Saturday Standard visited her home yesterday morning, we caught up with her on the roadside, holding a sachet of illicit brew. Donning a light-blue truck-suit, she was a pale shadow of her former self, but with sharp memories of her days as a boxing star.

She declined to speak to anybody, unless one offered to buy her a packet of the illicit drink. To be safe with her, we gave in and she led us to a den in Yala town where the drinks are sold as early as 6am. We arrived at the shop at 6.45am.

“I am the best boxer in the country today. Zarika (Fatuma) was my student and I am proud of her,” she said. Ochieng says this has been her routine.

“Once in a while she begs people for money to buy alcohol. I only buy her food, and we are not in good terms because I try to stop her from drinking,” he said.

In October 2013, Conjestina was detained at Avenue Hospital in Kisumu for nearly two months over a Sh595,000 medical bill. She had been hospitalised and could not be discharged due to the hefty bill.

Nairobi businessman Sam Wakiaga and then Nairobi Governor Evans Kidero helped bail her out after presiding over a mini funds drive that raised Sh750,000.

The boxer blamed her health condition and depression on lack of support from both government and the private sector.

In September 2012, opposition chief Raila Odinga’s wife Ida and diplomat Yvonne Khamati facilitated her hospitalisation in Mathari Hospital after her failing metal health status was highlighted by the media.

In January 2013, comedian Daniel “Churchill” Ndambuki handed her Sh180,000 for one-year rent payment as part of his contribution towards supporting her recovery. Popular musician Herbert Nakitare, famed as “Nonini”, was also reported to have offset her four months’ rent arrears. Also in September 2012, a social media campaign with the hashtag #KOT4Conje was started to help her and blogger Robert Alai, who was collecting the donations, tweeted that they had raised Sh55,000 by that evening when the cause was started.