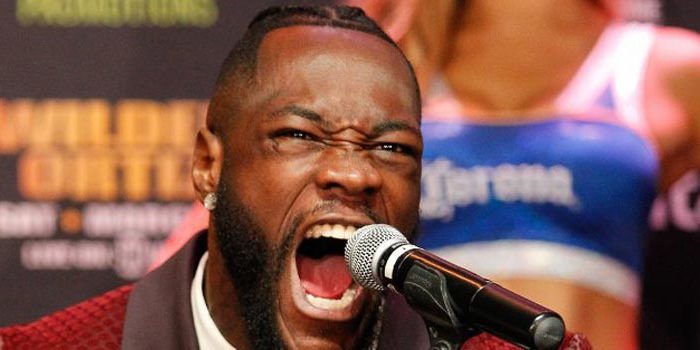 Deontay Wilder warned he has “transformed into a killer” as he ramped up his preparation for his fight with Tyson Fury, dismissing Anthony Joshua as a “coward.”

World heavyweight champion Wilder is putting his WBC belt and 40-0 unbeaten record on the line when he faces Fury in Los Angeles on December 1.

During a warm-up event in the city on Monday, the Bronze Bomber told reporters he was in “wonderful” condition.

He said: “I’m feeling wonderful. My mindset has changed, my body has changed, I feel like a killer. I’m transformed into a killer.”

Wilder compared his preparation for the bout to that of a soldier in the military, who knows “they’re going into dangerous territories” and have to “be prepared”.

The 33-year-old added: “When it’s time for fighting and I’m risking my life, I turn into the Bronze Bomber. When I’m in the ring it’s a different thing than when I’m just Deontay Wilder.”

“It’s all about Tyson Fury. I don’t want anyone to ask me about Anthony Joshua. He was a coward and that’s that.”

Wilder, who boasts a punishing 40-0 record with 39 wins coming by knockout, said he was “so tired” of talking about the fight and warned 30-year-old Fury he “doesn’t know what he’s gotten himself into”.

He added: “Nothing at all that concerns me or scares me (about Fury). I’m the best in the world.”

Tickets for the event, which is promoted by BombZquad Enterprises and Queensberry Promotions, in association with DiBella Entertainment and TGB Promotions, are on sale now. Ticket prices start at $75, plus applicable fees and are available via AXS.com. Wilder vs. Fury will be produced and distributed by SHOWTIME PPV.