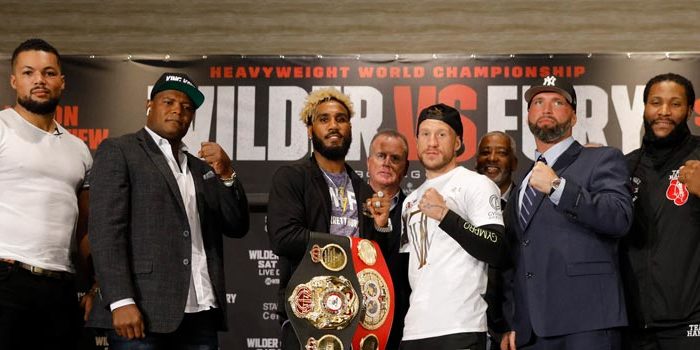 Fighters competing on Saturday’s PPV undercard headlined by the heavyweight championship showdown between Deontay Wilder and Tyson Fury went face-to-face on Thursday at the final press conference before they enter the ring on SHOWTIME PPV® from STAPLES Center in an event presented by Premier Boxing Champions.

Tickets for the event, which is promoted by BombZquad Enterprises and Queensberry Promotions, in association with TGB Promotions and DiBella Entertainment, are on sale now and are available via AXS.com. Wilder vs. Fury will be produced and distributed by SHOWTIME PPV. The suggested retail price (SRP) for the pay-per-view telecast is $64.99 for standard definition.

Here is what the press conference participants had to say Thursday from Westin Bonaventure Hotel & Suites Los Angeles:

“Everything that my team and I have spoken about has come to pass. I’m here as the co-main of a massive card and I’m just really appreciative of everyone who believed in me and helped push me to this moment.

“We don’t think of Welborn as a tune-up fight. Jason Welborn is a British champion for a reason. We just want to go out there and establish the game plan we worked on in camp.

“I want to show my defensive side and show that I can box and move. I want to show that I don’t have to just keep coming forward. I’m going to be able to do that and start to break him down and get him out of there.

“Everybody sees my demeanor, and they know that I carry that to the ring. My composure is my biggest attribute. No matter what anyone says, I’m always going to be me.

“I’m number one in the division and things are going to play out how I want them. We’ve had three tough camps training for southpaws. When I eventually fight (WBC champion) Jermell Charlo, I’m going to be ready because of all the work on my versatility and defense. I’ll be ready for Jermell Charlo.

“I want to be an active champion because I didn’t have a lot of amateur fights. I need to stay in the ring and get all the experience I can. I want to get these good fights in while I’m still young and healthy.

“I’m back from my surgery and we’re going to get back to the old Jarrett Hurd. I’m going to show everyone all that I can do. Everyone knows that there’s always going to be action. It’s going to be a wonderful fight on a wonderful card. Don’t blink during this one.”

“This is a dream come true to be here today. Hurd has worked his way up to get here just like I have. Right now, he’s in my way. I hope everyone enjoys what I bring to the table on Saturday night.

“I have the belief that I’m born and bred for this game and I’m going to show it to the whole world on Saturday night. I always prove people wrong.

“The last two years I’ve become the best in Britain and beaten everyone they put in front of me. When people doubt me, I train even harder. I’m coming to win and I’ve got nothing to lose.

“I have to get what I deserve and I’ll do it on Saturday night. I’ve already been through the storm. He’s got what I want.

“I’ve got to enjoy the fight and get what I want. He can look past me all he wants, but once he feels what I bring to the table, we’ll see how he reacts. I’m ready for whatever he’s going to bring to the table.”

“I want to thank everyone who has helped me get this opportunity. I like to do my talking in the ring, but I’m happy that Travis Kauffman stepped up. A lot of heavyweights haven’t done that and I’m glad we can make this fight happen.

“I’m coming to do my job. This is a heavyweight fight and we know that means one punch can change everything. It’s not going to end well for Travis on Saturday night.

“There are 10 rounds to get the job done, and three minutes per round. I’m going to get my job done. The job is to seek and destroy. So I hope that Travis is very prepared to give the fans a great show. Saturday night you’ll see ‘King Kong’ in the ring.

“I’ve pushed myself even harder than ever in training camp. We’re sticking with the same game plan of family first and I believe I will be rewarded. My five-year-old boy reminds me that I have a loss and that motivates me to train harder and harder.

“I expect Travis to have the great confidence he’s showing. It’s a great chance for him and I’m sure he’ll be motivated. I’m motivated for every fight, because it’s not just about my opponent. My goal is to provide for my family and Travis is in the way. I’ve never deterred from that mentality and it’s got me ready for Saturday night.”

“I’m thankful to Luis Ortiz for taking this fight. Everybody is afraid to fight him, but I’m not afraid of anyone. We all know that Luis Ortiz can punch, but I don’t care about any of that. It’s my time. I come from a rough background and I won’t back down.

“This is my time. There’s nothing that’s going to stop me from taking this guy down. He’s so worried about Deontay Wilder, but he has to worry about me before he gets any rematch.

“You might not know who I am right now, but you will after Saturday night. I’m going to make sure people remember my name.

“Luis Ortiz is very skilled, but if you want to be the best you have to fight the best. No one actually wants to step up and take this fight, but I really believe this is my time. I bring some heat in the ring and I come to fight every time.”

“I’m excited to be on this massive card. I’m going to give the whole world a treat as part of a great event. You have to tune-in and watch me start the show off right on Saturday night.

“Training in Big Bear has been a perfect environment for me. It’s in the mountains, it has the altitude and it’s secluded. I’ve seen what goes into their training camps and worked alongside the best in the world. They’ve helped me install the kind of style that will have me at my best.

“I have the Olympic pedigree, but now it’s about advancing the brute strength and really getting the perfect snap on my shots.

“Sparring against Tyson Fury was really top-level work. I know that it’s made me a better fighter. He’s looking fit and strong and it shows when you’re in the ring with him.

“This is a great opportunity. Abel Sanchez has done a tremendous job getting me ready for this position. I’m excited to show everyone my skills and everything I’ve learned.

“I’m glad that Joe Hanks decided to take this fight. I can’t wait to lace up the gloves and get the party started. I’m going to keep my knockout streak going and I guarantee it’s going to be exciting”

“It’s been a long time coming for this moment. I’m thankful to my team and I’m excited to be on this card with other great heavyweights. It’s a great time to be a heavyweight. I’m ready to put my name in the ring to have the chance to really do something special with a great performance Saturday.

“The work has been done. I did everything that I had to do. I’ve done more than I did preparing for my past fights. Being the underdog doesn’t mean much to me. I’m from Newark, New Jersey, and we’re all underdogs there.

“I’ve put the time in and I’ve had everyone supporting me and pushing me and I think it’s going to get me over the hump. I’m just really excited to get in there.”

“When we talk about Jarrett Hurd, he’s a fighter who has seemingly come out of nowhere and has had an incredibly rapid rise to the top. He was not a decorated amateur. He has learned on the job. All he has done since beating Oscar Molina in 2016 is impress. He is recognized as one of the bright young stars in boxing. He has been off due to injury and certainly could have taken an easier fight than Jason Welborn, who is a British Commonwealth champion. We’re expecting an action fight there.

“Luis Ortiz is one of the top heavyweights in the world. He has one blemish on his otherwise perfect record, a loss to Deontay Wilder. Perhaps Ortiz was just seconds away from victory. We talk about a slim margin in fights, that was the slimmest of margins. I think he is going to be trying to make a statement on the undercard that he deserves a rematch against Deontay Wilder. Standing in his way will be Travis Kauffman. This is another all-action fight filled with big punchers.

“In our opening bout, we have one of the most talked-about rising young heavyweights in the sport – Joe Joyce, who is taking on a tough veteran in Joe Hanks. As we know, the heavyweight division has been the focus more in the last six to nine months than we’ve seen in the last couple decades. Joe Joyce is at the top of the list on the potential next wave of future stars. He is certainly not wasting any time taking on a fighter of Joe Hanks’ caliber.

“When you look at the card overall, you’ve got some of the biggest punchers in boxing. I wouldn’t be surprised if we see several knockouts on this card. Don’t miss the action.”