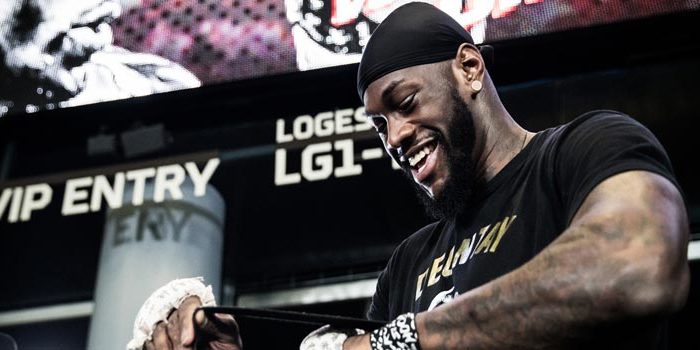 When Deontay Wilder speaks on his destiny, legacy, inspirations and motivations, his words may sound like the ravings of a madman.

But “The Bronze Bomber” believes everything he says, so much so that his alter ego, “The Bronze Bomber,” has flattened each of the 40 men he’s fought without losing on the way to winning and defending the WBC’s heavyweight championship.

“I have an on-time God,” said Wilder, of Tuscaloosa, Alabama. “He may not always come when I want him, but he’s always been on time in my life.”

Wilder claims to have been “prophesied” toward dethroning Bermane Stiverne on January 17, 2015 at the MGM Grand Garden Arena on the late Muhammad Ali’s 73rd birthday, making him America’s first heavyweight titleholder since Shannon Briggs in 2007.

Wilder-Stiverne represented the first heavyweight title fight at the MGM since November 1996 and June 1997, when Evander Holyfield won back-to-back bouts over Mike Tyson by 11th round knockout and third-round disqualification in the “bite fight.”

Holyfield watched from ringside as Wilder out-landed Stiverne by more than 2-to-1 (227-to-110) in total punches comprised of a 107-to-72 advantage in power shots and 120-to-38 in jabs, this, despite injuring his right hand in the third round.

“It also happened in proximity to Martin Luther King’s birthday, which is January 15. These type of things don’t just continue to happen as coincidence as much as they’re happening in my life.”

Wilder’s grandmother, a church-going minister named Evelyn Loggins, always told him he was “special,” “anointed” and “ordained.” She died at the age of 76 in 2010. Hall of Fame trainer, Emanuel Steward, who guided much of Wladimir Klitschko’s career, named Wilder his successor, calling him “No. 1 among the American heavyweights” and saying, “The best heavyweight prospect for winning the heavyweight the heavyweight title is Deontay Wilder.”

“What are the chances Emanuel Steward would predict I would become the next American heavyweight champion, and that I’d do it on Ali’s birthday?” ” said Wilder, , who turned 33 last month.

“ From the time I first heard it, I truly, truly in my heart of hearts, believed every word Emanuel Steward said. I firmly believe that all things happen in their appointed time.”

Not long after his daughter, Naieya, was born on March 20, 2005 with the congenital disorder spina bifida and told she might never walk, Wilder promised her he’d one day become heavyweight champion of the world, three years later earning an Olympic bronze medalist in the 2008 Olympics.

Wilder had starred as a high-school wide receiver and defensive end in football and at power forward in basketball, figuring he was destined to be an athlete at the University of Alabama.

But upon Naieya’s birth, a 19-year-old Wilder dropped out of college and took two jobs, one driving a truck and another at a restaurant to support her.

“I’ve had to overcome a lot,” said Wilder, who left Shelton State Community College and turned to boxing at a friend’s urging. “But this is just the way things continue to keep happening in my life/”

Wilder served as the primary sparring partner for Klitschko in advance of the then unified heavyweight champion’s unanimous decision victory over Mariusz Wach in November 2012.

Wilder ‘s turned 27 years old in Klitschko’s camp three days prior to Steward’s death of cancer on October 25, 2012 at the age 68.

“I’ve become the world champion just like Emanuel Steward once said that I would. I am anointed like my grandmother said. Ya’ll wanna see the [Muhammad] Ali era or the golden days?” said Wilder.