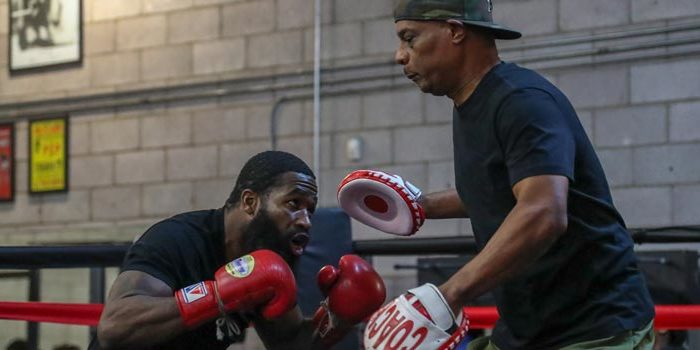 Tickets for the event, which is promoted by MP Promotions, Mayweather Promotions and TGB Promotions in association with About Billions Promotions, are on sale now and start at $100, not including applicable service charges, and can be purchased online through AXS.com, charge by phone at 866-740-7711 or in person at any MGM Resorts International box office.

Broner, along with trainer Kevin Cunningham, have been at Barry’s Boxing in Las Vegas finishing up training camp after spending most of camp in West Palm Beach, Florida preparing to face boxing’s only eight-division world champion in Pacquiao. Here is what they had to say Monday at Barry’s Boxing:

“Every fighter is different, but I know if I touch him flush, I’ll put him out. It’s no secret, he’s been to sleep before.

“I’m in shape and ready to go. We had a tremendous training camp. I could have made weight weeks ago. We’re prepared to go out and execute.

“I’ve been here before, and even though I haven’t been in a fight of exactly this magnitude, I’m just treating it like any other fight. He’s another opponent.

“A lot of people are saying that Pacquiao’s age will be a factor, but I’m not looking at it like that. You see guys like Floyd Mayweather who stay undefeated at an older age. I’m just focused on being me. As long as I do what I have to do, I will be victorious.

“We’re ready for whatever this fight is going to end up being. It could definitely be a war. I’ve always been an underdog. I came from the trenches and I’m bringing that mentality into the ring.

“I can take over boxing with a win over Pacquiao. There are a lot of great fighters in this sport, but they just don’t bring what I bring to the table. With a win like this, it would put me right where I was always meant to be.

“I’ve always wanted to fight the big names like this and I knew that I just had to keep working hard and the time would come.

“Once that bell rings, I’ll make my adjustments and go ahead and get my victory. I don’t have anything I want to go out and prove. It’s just about winning. That will say everything.”

“Preparation has been great. Camp has been tremendous. Adrien is ready to go and extremely focused for this fight. He came into camp that way and it’s stayed that way.

“We added some things this training camp, because we know he’s fighting a legendary fighter. This is one that he has to have and he realizes it. I expect a spectacular performance.

“I think on Saturday night that Adrien is going to be that guy that everyone expected him to be from day one. It will open a lot of eyes. I believe that we put the work in. I can’t see Adrien coming out of there without a victory.

“The key to victory is for Adrien to just be himself. He has to do what he does best with no hesitation. He’s going to throw the right punches at the right time.

“Pacquiao still throws combinations but they don’t come in as fast or as sharp as they used to. He can throw as many punches as he wants to throw, but if they’re not landing, it doesn’t mean anything.

“I think Adrien is the quicker fighter. Quickness offsets speed, all day, every day. It’s all about being quick enough to time the guy with your hand speed. It’s different than just throwing a bunch of fast punches.”