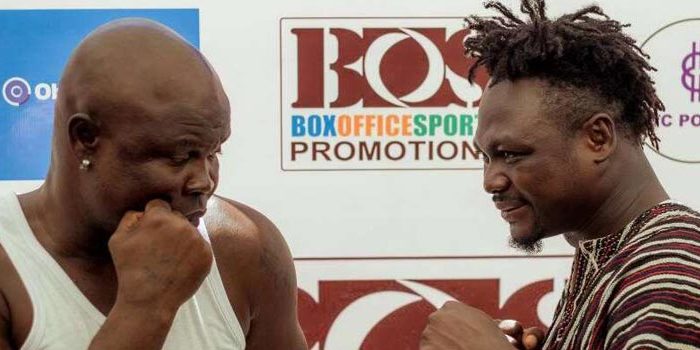 Former WBO Africa cruiserweight champion Brimah Kamoko, popularly known as Bukom Banku, has rubbished suggestions that he is running away from his sworn rival Bastie Samir, confirming he will honour a rematch with the 2008 Olympian on December 26 this year.

Banku who previously held the WBO Africa light heavyweight title recorded his first loss in a local grudge bout in Accra to Bastie Samir via a seventh-round knockout in October 2017. Banku who now holds a record of 30 wins and a loss failed to honour a rematch set for June 2018 after he had signed a contract for it under Box Office promotions.

“How can I run away? I am not running from Bastie. However, my loss to him really got my family crying. I want to avenge that defeat and get the smiles on the faces of my kinsmen,” Banku told Joy Sports in a conversation at the Bukom Square in Accra.

The former African champion also explained that at certain points last year he unsure about the fight and whether it would come off. “I have the confidence now and I am certain the bout will come off. Azumah Nelson promotions want to pull this off and I am ready,” he said in a confident tone.

Banku is adored greatly in his native Ghana for his charisma and special brand of English which he has used to sell boxing tournaments over the last 14 years. He is yet to achieve his dream and much-trumpeted aim of becoming a major world champion after dominating at light heavyweight and cruiserweight in the key rankings over a period.

He revealed plans to hit the gym for intensive training in a few months to start getting in shape. “The fight is at the end of the year so I will pace myself and go into training after some good relaxation,” he said.

Sometime in 2016, Bukom Banku appeared shades lighter than he was originally known – he had resorted to bleaching. He justified it severally and received adequate backlash for it and subsequently pledged to put a stop to it. But only a few days ago, he did a U-turn and says he will continue to bleach to remain relevant. Controversial as it may sound, the boxer says he will not back down on the recent decision.

The Accra-based boxer’s 30 wins have 27 coming by way of knockout and on the day when he tasted defeat for the first time, it was a KO. After 13 straight wins, Banku fought Nigerian Michael Gbenga, now a journeyman in a tough 12 rounds to annex the African light heavyweight title. Banku, who was then a sparring partner of former WBA welterweight champion Ike Quartey, gained great experience from the training camps. He went ahead to maintain a winning streak and this earned him a shot at the WBO Africa light heavyweight title. He made a fourth-round casualty of Jorge Rodriguez Olivera of Uruguay in that bout and went ahead to defend the title against Namibian Vikapita Meroro and Hamza Wandera of Uganda. Bukom Banku then moved up in weight and fought Pascal Ndomba at Cruiserweight, where the WBO Africa belt was at stake. Ndomba was stopped in the 7th round.

Following all these, Golden Mike, Banku’s promoters at the time sought bigger opportunities as the boxer had leapt into the top five rankings. A targeted challenge of then champion Nathan Cleverly never materialized.

In 2016 the former WBO Africa champion campaigned vigorously for Ghana’s opposition party National Democratic Congress (NDC) who were led by his good friend John Dramani Mahama, the former President of Ghana. Banku struck an acquaintance with the former President after the former watched his WBO Africa title defence against Vikapita Meroro in Accra in 2011, while he served as Vice President. It was actually the then Ghana Vice President’s first live fight experience. “I will always support my father John Mahama, however, Nana Akufo-Addo is my president and I will always show him the respect because he is the father of the nation,” he told Joy Sports.

The boxer has a large family. At the last count, he had 13 children from a little more than two wives and is expecting a 14th. Banku told Joy Sports he loves the idea of procreation and will continue to have children. “I want to have a whole football team with reserve players. I will invite all my friends to the naming ceremony on January 29 and we will celebrate in a grand way,” he added in a tone of usual humour.

Twelve out of the 13 are hardly interested in pursuing boxing but the last one, a boy seems to show traits according to Banku. “I see my newborn son as the only one amongst them to do great things in boxing,” he said.