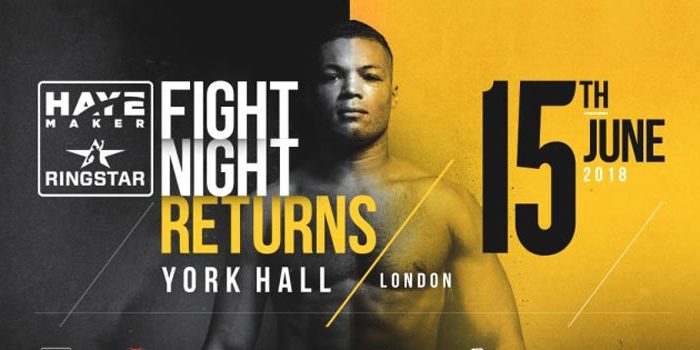 Poxon Sports and PBC are delighted to announce that heavyweight sensationJoe Joyce will defend his Commonwealth title in the biggest test of his unbeaten career when he takes a gigantic leap up to confront the Former WBC World Champion Bermane Stiverne on Saturday 23rd February at The O2, exclusively live on ITV Box Office.

Joyce vs. Stiverne, promoted by Poxon Sports in association with Ringstar Sports and Don King Productions, will feature alongside the return of Former IBF World Featherweight Champion Lee Selby as one of the chief-supporting contests on an action-packed show, headlined with the thrilling all-British clash between fierce rivals James DeGale and Chris Eubank Jr.

The 6ft 6in ‘Juggernaut’ from Putney, South West London, has destroyed all seven of his opponents since turning professional in October 2017 after capturing the Silver medal at the Rio Olympics and has singled himself out as one of the most feared talents in the heavyweight division.

It’s a monumental test for Joyce to be facing a former World Champion in just his eighth fight, the rock-solid and sledge-hammer hitting Stiverne, born in Montreal, Canada, of Haitian descent and based out of Las Vegas, has fought some of the biggest and best in the division, including Deontay Wilder and Chris Arreola.

The fight has added bad blood thrown in resulting from a sparring session between Joyce and Stiverne in which Joyce was angered by comments from Stiverne in an interview afterwards when he said he took Joyce to school.

Joyce said, “I had respect for Bermane Stiverne. We sparred in Las Vegas; he said he took me to school in an interview etc, it got ugly and it made this fight happen. I tried to be respectful of him, but he’s rude and was having none of it. He is a former World Champion that has gone 12 rounds with Deontay Wilder and will give me a real challenge; but my engine and my power will be too much for him, a fact he should be aware of!”

Joyce’s promoter Richard Schaefer, Chairman and CEO of Ringstar Sports, said, “After only seven fights Joe Joyce has become the number five ranked Heavyweight in the world. But the spectacular way in which he has won all of his seven fights by knockout have made him the number one fan favourite in the Heavyweight Division. Taking on the heavy-handed Former World Champion Stiverne shows that no challenge is too big for Joe as he continues to march towards the Heavyweight World Championship. Simply put: Joe Joyce has become must see TV, so make sure to tune in on February 23 or come and watch him live at the O2 in London!”

Stiverne said, “I told my promoter Don King to get me any man on earth and I will fight for the right to prove myself to the world. Then the phone rings, it’s Don, he tells me Joe Joyce – a boxer with only seven bouts – agrees to meet me! ‘Seven bouts?’. Seven fights and he has the audacity to box me? I have stopped Chris Arreola, Ray Austin, the then undefeated Kerston Manswell – and a boxer with seven fights wants to box me?!.’ I said to Don ‘Sign it, take it, grab it,’ I’m ready. Seven fights – and he wants to box me? For me it is a dream come true – but for Joyce it will be a nightmare. I will knock out Joe Joyce and step over him to KO Anthony Joshua. I’m primed and ready. The real Bermane Stiverne will be there on February 23 and will knock out Joe Joyce en route to regaining my heavyweight crown.”

Stiverne’s legendary promoter Don King, added, “It is with my greatest pleasure that Don King Productions can announce our return to Jolly Old England – the ‘Cradle of Boxing” where my pugilistic giant – the Former Heavyweight Champion of the World Bermane Stiverne begins his comeback at the expense of the Giant Joe Joyce. Unfortunately, for the local fans of Joe there will no ‘re Joycing’ – as my once – and future champion Bermane Stiverne will slay Joyce just like St. George did the dragon of old. But no matter, we will pick up the pieces and bring back Joyce just as I have brought back and helped build many a future together. I recall when I came here with Oliver McCall and he was given no chance against Lennox Lewis. Then the underdog became the top dog when Oliver KO’d the previously unbeaten champ and we went home with the title. History will repeat itself of February 23 when Bermane sends another undefeated Englishman to defeat. Now retooled, resuscitated, renewed, rejuvenated and recommitted Bermane Stiverne will resurrect his career on February 23 when the ‘Lord of Ring” crushes the “Lord of the World” – ‘Juggernaut” Joyce on his inexorable march to regain the heavyweight championship of the world. Bless all British fans, God Save the Queen – but heaven help Joe Joyce! We will see you on February 23rd.”

WBC World Heavyweight Champion Deontay Wilder also put forward his thoughts on the intriguing match up, he said, “Joe Joyce will be a good test for him (Stiverne). I’ve seen Joe Joyce before. He’s a good fighter. Joe Joyce fought Joe Hanks on my undercard with Tyson Fury but I didn’t get a chance to see him fight that night. But I’m looking forward to seeing him against Stiverne.”

Richard Poxon, UK Promoter for PBC, said, “I’ve known Joe from his amateur days up in Sheffield. His success at the Olympics didn’t surprise me at all. He’s transitioned well to the pros now and is clearly in a hurry. The heavyweight division is the one that everyone is looking at again and I fully expect Joe to be in the thick of the action in the coming year. Taking on a former WBC World Champion in only your eighth fight clearly shows what Joe’s ambitions are.”

Since embarking on his pro career in his quest to become World Heavyweight Champion, the quietly spoken Joyce has let his destructive fists do the talking in making bold statements to make the boxing world sit up and take notice of the fast-rising star.

In October 2017 he astounded critics when he choose to fight the hardened Former British title challenger Ian Lewison, who had just extended big-punching Dillian Whyte to ten rounds, for his pro-debut and pounded him down in eight rounds.

Then in only his fourth fight with only 12 rounds under his belt and inside seven months of turning pro, Joyce demolished the Commonwealth Heavyweight Champion Lenroy Thomas in just two rounds – setting a new record by heavyweight boxer to win the Commonwealth belt.

In his last fight, American fights fans got a brief taster of what the British star is all about when he smashed through Joe Hanks in a round to win the WBA Continental title at the Staples Centre in Los Angeles in making his glittering U.S debut.

Joyce, now ranked #5 in the world by the WBA and progressing quickly towards a World Title shot, faces unquestionably his sternest career test to date against the vastly experienced and equally big-hitting Las Vegas based Haitian who has knocked out 21 opponents of his 25 wins in his 29 fight career.

Stiverne formerly held the WBC crown for two years after defeating Chris Arreola on points in April 2013 to win the title and then in the rematch destroying him inside six rounds in the first defence of the title in May 2014.

The rock solid Stiverne then pushed the dynamite-punching Deontay Wilder the full twelve round distance in the next defence of his WBC World Heavyweight title clash in January 2015. Stiverne became the first man to take Wilder beyond who at that point had obliterated all his opponents inside four rounds. In the rematch nearly three years later, Stiverne stepped in at the last minute when Wilder’s original opponent Luis Ortiz failed a drugs test and due to his inactivity was stopped in a round.

Stiverne is now looking to return to the elite heavyweight mix and a victory over Joyce would propel him back into the limelight and on course towards a potential world title opportunity.