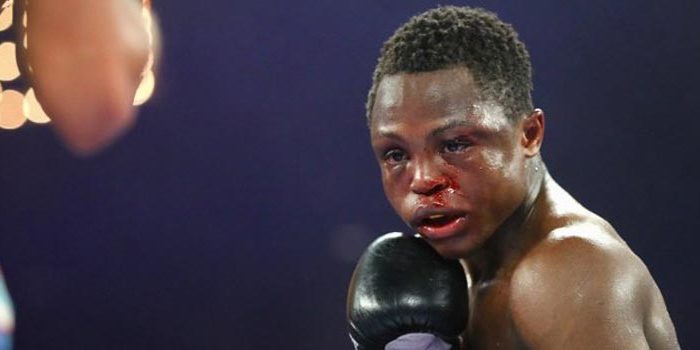 Dogboe lost a twelve round unanimous decision, and his WBO belt, to Navarrete – before a lively crowd at Madison Square Garden in New York. The contest was the co-feature to Vasiliy Lomachenko’s lightweight unification victory over Jose Pedraza.

It was only Dogboe’s second title defence and his first career loss in 20 professional bouts.

Dogboe was beaten and battered, and at one point it appeared that he would be stopped inside the distance.

Dogboe arrived on the scene earlier this year, after winning the WBO super bantamweight title with an 11th round TKO victory over unbeaten Jessie Magdaleno. In August, he made his first title defense with a first round knockout over Japan’s Hidenori Otake – who had never been stopped in the past.

But he was unable to deal with the much taller and longer Navarrete, who threw hard punches in bunches and from odd angles.

His coach reveals that his son suffered stamina issues in the contest, due to his training camp being disrupted by attending various functions.

He believes the loss will allow Dogboe to come back even stronger and position himself once again to a world title shot.

“I think we underrated him [Navarrete] and paid the price for it. We learnt our lessons because we wanted to take him out in five rounds but our game plan failed. The fact is that we didn’t really prepare well like we do ahead of every fight and it affected him,” Paul Dogboe said.

“You could see in most of the rounds that Isaac’s legs were gone and it was up to fitness but we are keen on coming back stronger.”