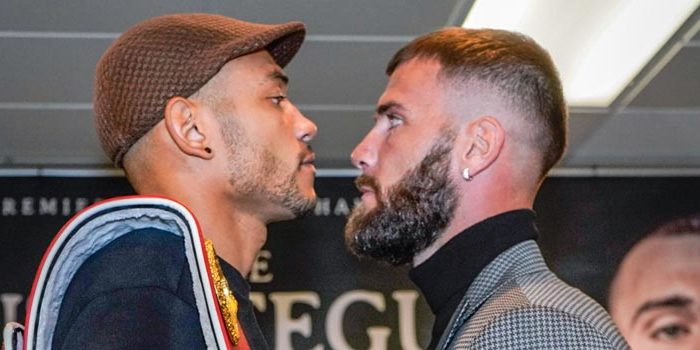 Also in attendance Friday and competing in action beginning at 8 p.m. ET/5 p.m. PT were unbeaten featherweight Brandon Figueroa and former title challenger Moises Flores, who meet in a 12-round super bantamweight clash, and sensational prospect Joey Spencer, who enters the ring against Brandon Harder in a four-round super welterweight attraction.

Tickets for the live event, which is promoted by TGB Promotions and Zanfer Promotions, start at $50, are on sale now and can be purchased at AXS.com.

The night of fights will also include PBC Prelims on FS1 and FOX Deportes beginning at 6:30 p.m. ET/3:30 p.m. PT and featuring the return of former world champion and pound-for-pound contender Guillermo Rigondeaux against Giovanni Delgado and hard-hitting 2016 Mexican Olympian Lindolfo Delgado in an eight-round super lightweight fight.

Here is what the press conference participants had to say Friday from the Westin Bonaventure Hotel & Suites in Los Angeles:

“I’m looking forward to this fight a lot and I’m really excited for Sunday. I can’t wait to show off my talent against a great fighter like Caleb Plant. You can say whatever you want outside of the ring, but we still have to get inside of the ring, and that’s when I do my best talking.

“My motivation is my family. I get up every morning to train and I’m away from my family, which is difficult. But on Sunday I can show that all the hard work paid off and I am the best.

“This is a big fight for me to continue to prove that I’m the best super middleweight in the world. I want all the other champions, but I know that I have a tough fighter to get through first. Caleb Plant will be a good test on my way to what I want to accomplish.

“I’m going to give a great fight for all of my fans in Mexico and the U.S. and everyone watching. They’re going to have a great show on Sunday night.”

“Everyone considers Uzcategui the bogeyman of the division, but I’m ready for him. I hope he’s ready. I’m going to take his belt and his spot in the division.

“This is a lifelong dream of mine. Fighting for the world title means everything, but it’s also just the first step. We’ve been in the studio cooking up something hot and the drop date is January 13.

“I think with our styles, this has the makings of a great, memorable fight. Everyone knows I have the skills and speed to hear ‘and the new’ on Sunday night.

“We were supposed to fight in August. I broke my hand in July and we had to move it back, but this fight has been set since June. Even when he fought in September and he said he had a down performance because he was ‘trying to trick’ someone into fighting him, I was waiting for this fight and I hope he’s not taking me as an easy task. Because he has another thing coming.”

“This is going to be a tough fight. Moises Flores only has one loss and I know he’s training hard to bounce back. But I’m going to be ready for anything he brings.

“I’m 110 percent focused and ready for this moment. I’m back and ready to work this Sunday. I hope everyone comes out and supports all the hard work these fighters have put in for this show.

“Flores comes prepared. He’s been fighting tough contenders, but I’ve seen the fights he’s had and I don’t think people have really hit him to the body. My game plan is to break him down and try to catch him and knock him out if I can.

“My father has been the backbone of my career and him, along with the rest of my family and supporters in Mexico and all over the world, have helped me get to this moment. I’m close to reaching my goal and I know that means I have to win this fight on Sunday.”

“I know that I’m facing a tough undefeated opponent, but I’ve fought the tougher competition and experienced more difficult fights. That’s going to help me in the ring on Sunday.

“I was derailed in my last fight, but I’ve made the proper corrections and I’m back and ready now. I’m 100 percent now and I’m going to show everyone who Moises Flores is.

“I’d like to thank my team, my family and even my dog and my cat. I’m happy to be back in the ring so I can show everyone what I have in me.”

“I’m thankful to everyone for coming out and supporting this event. I couldn’t be happier with how my career is going at this point. I’m looking forward to putting on a show on Sunday and turning everyone who hasn’t seen me into a believer.

“This year I’m looking to have even more of a breakout year than last year. I really want to get ready to enter that contender space and get ready to start looking at some titles.

“I’m looking forward to putting on a lot of good shows this year and performing for the fans. I’m excited to get it all started on Sunday night on FS1.”

“This is going to be a sensational show on Sunday night at the Microsoft Theater. PBC and FOX Sports got off to a great start last month in Brooklyn kicking off the new PBC on FOX series and we’re excited to be here to launch the first FS1 show on Sunday night.

“PBC has made a major commitment to bringing some of the best and biggest fights to Southern California. It started off in December with the Wilder vs. Fury fight, continues on Sunday with this great fight and continues in February with Gervonta Davis vs. Abner Mares and Leo Santa Cruz vs. Miguel Flores cards.

“We believe that downtown Los Angeles can be a major hub for the sport of boxing. Come out and support this show on Sunday and get started on a terrific year.”