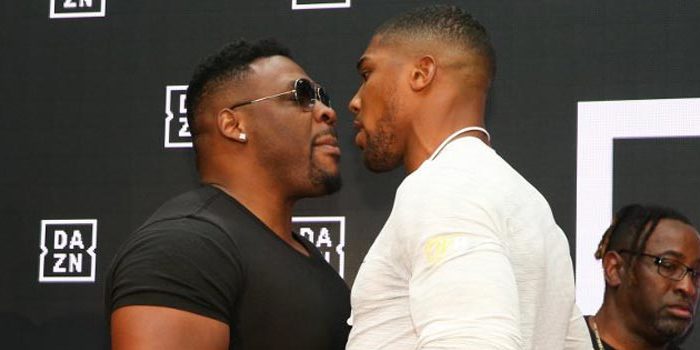 THE Brit is coming. DAZN officially announced Wednesday morning that Anthony Joshua will make his debut on American soil against Jarrell Miller on June 1 at Madison Square Garden. The unbeaten British superstar will defend his IBF, WBA and WBO heavyweight titles against Brooklyn’s Miller in a main event DAZN will stream live from “The Mecca of Boxing” in New York.

The 29-year-old Joshua has fought exclusively in the United Kingdom since the 2012 Olympic gold medalist turned pro five years ago. He has long expressed a desire to fight in the United States, where his rival, WBC champ Deontay Wilder, resides.

Joshua’s American debut is widely viewed at least as progress toward he and Wilder eventually fighting in the heavyweight title unification fight fans are anxious to watch. After witnessing Canelo Alvarez’s destruction of fellow Brit Rocky Fielding from ringside at Madison Square Garden on December 15, the Watford, England, native can’t wait to fight in the famed arena himself.

“June 1st, I am heading to ‘The Big Apple’ and I plan to embrace the culture and leave with an appetite for more,” Joshua said in a press release issued by DAZN. “I will be fighting Jarrell Miller at the legendary Madison Square Garden. It has been an honor and a blessing to fight at some of the best venues in the world at home, in the UK, not least Wembley Stadium. But the time has come to head across the Atlantic and defend my heavyweight titles in the USA. I am looking forward to taking on another challenge with a good boxer and a brilliant talker. It will be an exciting fight. I will leave nothing to chance and plan on dismantling Miller in style to make my mark.”

The former MMA fighter has stopped veterans Gerald Washington, Mariusz Wach, Tomasz Adamek and Bogdan Dinu during that stretch. He also soundly defeated Johann Duhaupas in a 12-rounder sandwiched between the Wach and Adamek matches.

The trash-talking, 6-feet-4, 315-pound challenger is eager to not only win four heavyweight titles, but to ruin the biggest bout in boxing that has yet to be made.

Joshua and his promoter, Eddie Hearn, had planned for him to defend his titles April 13 at Wembley Stadium in London. He twice has helped draw crowds in excess of 80,000 to that outdoor venue, but they ultimately decided to make his U.S. debut in his next fight.

“It’s been an eventful few months, but I’m delighted to finally announce that Anthony Joshua will make his American debut at the iconic Madison Square Garden on June 1,” said Hearn, Matchroom Boxing’s managing director. “AJ has created an incredible ‘Lion’s Den’ atmosphere in the UK and we plan to bring that energy to New York on a card that will be stacked with British versus American talent. When you look at the heavyweight greats that have graced the renowned ‘Mecca of Boxing,’ the names of Ali, Frazier, Marciano and Tyson stand firm, and June 1 will be a moment when the world will witness AJ’s turn.

“Jarrell Miller is someone I know well, having been involved in his last four fights in America. I know how much he wants this fight and I know the belief that him and his team have in beating AJ. He is a mountain of a man, with an incredible work rate, and he will get the chance to challenge for four world heavyweight belts in his backyard this summer. They went head-to-head for all the wrong reasons last summer [in New York] and next week they will do it again as we get ready for the big buildup for a momentous moment on June 1st at MSG.”

A press conference to officially kick off the Joshua-Miller promotion has been scheduled for Tuesday at Madison Square Garden. Ticket information will be made available soon.

DAZN subscribers can view Joshua-Miller, the Alvarez-Daniel Jacobs middleweight title fight May 4 and numerous other boxing events for $9.99 per month. Beyond DAZN streaming it in the United States, Joshua-Miller will air as a pay-per-view main event on Sky Sports Box Office in the UK. 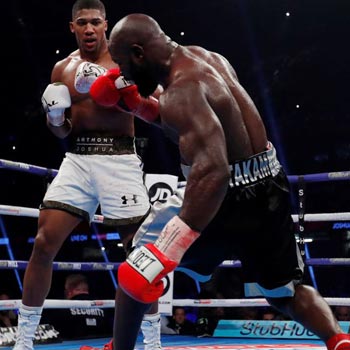