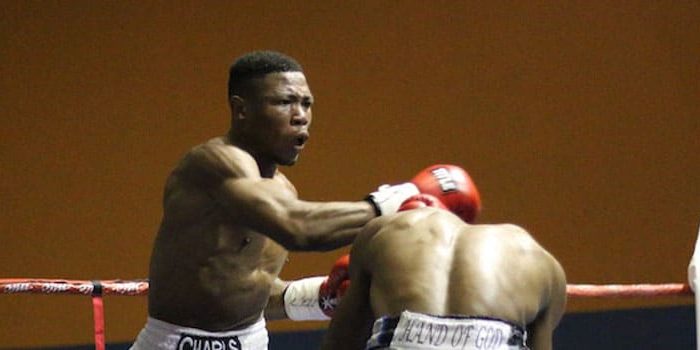 At a packed hall at A Shipena Secondary School, the powerful Shinima dominated from the start and put Kaangundue down for the count of eight at the end of the first round.

Kaangundue managed to get up, but he didn’t last much longer as Shinima was all over him in the second round.

He once again put Kaangundue down and although he beat the count, Shinima knocked him down a second time and this time the referee stepped in to stop the fight, one minute 59 seconds into the second round.

It was Shinima’s eighth consecutive victory and gives him his first national title, while Kaangundue’s record now stands at six wins and four defeats.

Shinima said he was well prepared for the fight.

“I want to thank my trainers, because I was really well prepared and we made sure that we could overcome his power.

His promoter Nestor Tobias said Shinima had a big future.

“We’ve been grooming and developing our up and coming boxers and that’s why we went back to the roots. This is just the start for Charles and the sky is the limit. He’s got speed, power and skills and now we will go for the African title and then the international title,” he said.

Simon took his time, picking Weyulu off with some sharp jabs in the early rounds, while Weyulu launched some sporadic attacks and managed to land some shots in close exchanges.

They hardly bothered Simon though, who grew in stature as the fight progressed and by the third round started displaying his fast hand speed. With the crowd cheering him on, Simon went into overdrive in the fourth round, landing punches at will, before the referee stepped in to stop the fight 2:58 into the round.

A lightweight fight over four rounds between Usko Rehebeam and Gerson Veta ended in a draw, which drew a lot of jeers from the crowd.

The taller Rehebeam had a distinct reach advantage, but the nuggety Veta took the fight to him and dominated the close exchanges and was unlucky not to win the fight.

In a super bantamweight fight over four rounds, Filipus Nghitumbwa beat Frans Naanda on a second round TKO after the referee stopped the fight with two seconds of the round remaining.

In a junior middleweight fight Abed Shikongo made a winning debut when he beat Ndangi Shapwa on a second round TKO.

Shikongo already put Shapwa down for the count of eight in the first round and when he once again sent him to the canvas in the second, the referee stopped the contest 2:30 into the second round.