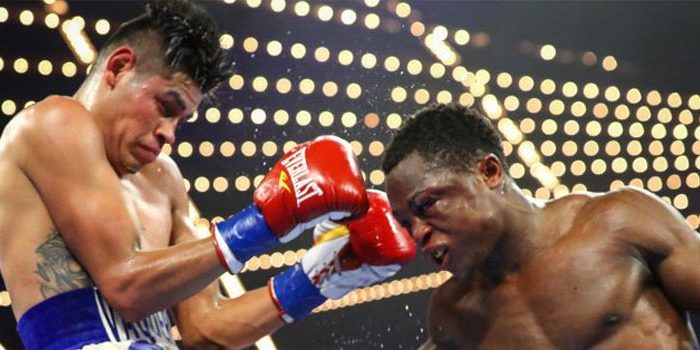 The expected rematch between Emmanuel Navarrete and Isaac Dogboe is budgeted to be held as the co-feature to another rematch, between Miguel “Alacrán” Berchelt and Francisco “Bandido” Vargas, which is taking place on May 11.

According to ESPN Deportes, sources close to the organization of the event have said that both Navarrete and Dogboe have been notified of the date. Initially it was scheduled for April 20 in the support of ESPN pay-per-view event featuring the welterweight clash between Terence Crawford and Amir Khan. at Madison Square Garden in New York.

As BoxingScene.com previously reported, the rematch between Berchelt and Vargas had moved to May 11 due to an injury suffered by Berchelt after announcing the bout for March 23.

It is expected that the official announcement of the card will be given shortly, since the headquarters of both rematches has been designated, which could be on Californian soil.

Berchelt will give Vargas a rematch more than two years after dethroning him as WBC super featherweight champion in January 2017, while Navarrete will give immediate retaliation to Dogboe, who was stripped of his WBO super bantamweight crown and undefeated record last December at the Hulu Theater of Madison Square Garden in New York.

Both Navarrete and his team had expected to make an interim-fight before giving the rematch to Dogboe, but the African and his team insisted on direct rematch to take advantage of Navarrete’s option with Top Rank, since the fight was a mandatory defense due to the WBO.

“Alacrán” Berchelt will arrive with a professional record of 35-1 and 31 knockouts, while “Bandido” Vargas will do so with 25-1-2 and 18 knockouts.