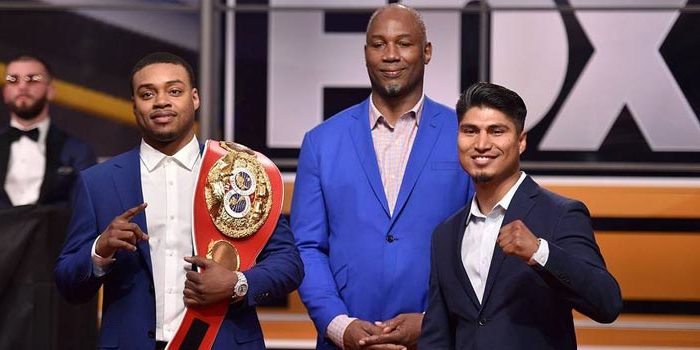 Four-division world champion Mikey Garcia has his work cut out for him on Saturday night. Garcia will be making his 147-pound debut versus IBF World Welterweight Champion Errol Spence Jr. in a FOX PPV (9 p.m. ET/6 p.m. PT), live from AT&T Stadium in Arlington, Texas.

In Spence, Garcia (39-0, 30 KOs) is facing an undefeated fighter that has merited top-five recognition on boxing’s pound-for-pound list. To Garcia’s credit, he too is undefeated, and is also recognized by pundits as a top pound-for pounder. To dismiss Garcia’s chances against Spence (24-0, 21 KOs) may be unfair, but in boxing, size truly matters. So how realistic is it for Garcia to defy the odds?

“This is a great battle between two top-10 pound-for-pound fighters,” said Freddie Roach, Hall of Fame trainer and seven-time recipient of the Trainer of the Year award. “Mikey is showing great courage in challenging Errol, but I think he may have taken on too much in moving up for this one. It’s is the type of fight that creates intrigue for fans and that’s good for boxing. I’m going with Errol Spence in this one. I think he has the size and power advantage. I’d love to see [Roach fighter] Manny Pacquiao fight the winner next. What a fight that will be!”

“I do [like his chances] as long as he feints before delivering his punches,” Atlas said. “Mikey is a terrific technical boxer. So, it is imperative that he doesn’t give up his defense for offense. Mikey has to get in and get out, put his punches together and not get too greedy. By getting off first, essentially Mikey is cutting the side of the beef off, by simply cutting the sides off and not the middle, Mikey can take small bites of the beef.”

“People think that the only way to win a fight is by a fighter exploiting the flaws in his opponent,” Atlas explained. “Forget about what [Spence] does bad. Mikey must prevent Spence from doing everything that he does well. Everyone is (saying) that Mikey is at a disadvantage because he is the smaller man. No, he’s not (at a disadvantage.) As a result of being the smaller man, Mikey is quicker, he’s more fleet-footed against the more cement-footed Spence.”

“I am not sure as to what Mikey sees,” Malignaggi said. “He is obviously very confident. But Mikey is a very good fighter, and I think he will make a go of it. But can he create doubt in Spence by hurting him? Mikey is certainly good, but can he get that respect?”

“[Garcia] can win sure, but it will be very tough,” Malignaggi suggested. “Mikey must try to take the least amount of damage possible in the early rounds, while winning them or winning most of them. If he is taking heavy shots in the first half of the fight, even if he is competitive, I cannot see him lasting.”

“I don’t see what Mikey Garcia sees,” said Shields. “Errol is a big welterweight and flawless as a fighter. He jabs well, he is a strong puncher, and he is an effective body puncher. Mikey is a good boxer, but not better than Errol. Errol is a big strong southpaw rarity like a Marvin Hagler.”

Although Shields’ pick to win the fight is obvious, he did mention that the Spence-Garcia is a “60/40” type of fight.

“This is boxing, and anything can happen,” Shields said. “Errol is human, and he could have a bad night. But one thing is for sure, Mikey needs to be in the best shape of his life the night of March 16.”

Hall of Fame inductee James “Buddy” McGirt was once a pound for pound fighter himself. As a trainer, he engineered Antonio Tarver’s shocking upset TKO of Roy Jones Jr., rejuvenated the career of the late Arturo Gatti and, most recently, trained Sergey Kovalev to outbox Eleider Alvarez in a rematch of Kovalev’s KO loss to Alvarez months earlier.

Does McGirt think Garcia has bitten off more than he can chew?

“I do think that Garcia has his hands full with Errol,” said McGirt. “Garcia has a heck of a journey in front of him come fight night. But in all fairness, Garcia is more experienced than Errol. Errol is still green and rough around the edges. Garcia is by far the best fighter that Errol will face.”

Former two-division champion and boxing analyst Timothy Bradley sees some flaws that could be exploited by Garcia.

“Errol [Spence] is fundamentally sound,” Bradley said. “He has a great jab and can dominate an entire fight with his jab. However, Errol is heavy on his front foot. He can and does take chances due to being so strong and built like a tank, but as a result of him mowing you down, he is there to be hit. A counter-puncher would be very successful against Errol, due to him lunging forward. He loads up on every punch while keeping his head straight down the middle. In the fights with Kell Brook and Lamont Peterson, there were spots where Errol stood and got clipped. Although he keeps his hands up, you can come around his guard.”

“Mikey has great ring I.Q,” Bradley continued. “For a small guy, Mikey is comfortable in the pocket and can make pressure fighters back up. Believe me, I have seen him do it before. I take my hat off to Mikey. He is going for greatness. I don’t think that Mikey will win, due to Errol wearing him down over the course of 12 rounds. If Mikey wins, in my opinion, he becomes the best fighter pound-for-pound.”

“Mikey Garcia fits the prototype of an ectomorph body type,” said Shilstone. “Athletes fit into one of three categories when describing body types. You have a mesomorph, which is a person with a compact and muscular build. Then there is an endomorph. An endomorph is an individual with a soft round build and has a high proportion of fat tissue.

“Lastly, you have an ectomorph. An ectomorph is a person with an elongated and slim build. An ectomorph is compromised by their height. Which means yes, you can absolutely increase your body weight utilizing the proper physical fitness regimen, but it is somewhat stunted by your height. It would be in adequate and unprofessional of me to speculate as to what would be a good target weight for Mikey. I would have to assess his bones density using a DEXA scan. In boxing you can opt to go up and down in weight, but your height and reach doesn’t change. That stays the same.”

Garcia is aiming to disprove the old boxing adage that a good big man beats a good small man. On Saturday night, we’ll find out if he’s right.