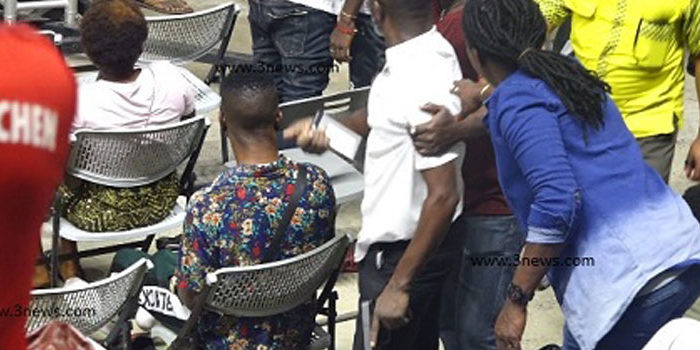 There was gunshot inside the Bukom Boxing Arena Wednesday night following the cancellation of a scheduled boxing match. The match was called off due to the late arrival of the boxers.

SWAG Boxing Referee of the Year Roger Barnor pulled out a pistol and fired a warning shot, leading to mayhem.

It was the first title bill under the Ghana Boxing League dubbed Fist of Fury involving boxers from Ghana, Burkina Faso, and Benin.

The event, in collaboration with Landmark Promotions, got underway an hour-and-a-half late but had the first two bouts canceled due to the absence of the boxers paired.

The remaining seven bouts had been progressing steadily until the ring announcer called out for the final bout.

And that was what turned things at the Arena.

Supporters of one of the boxers in the earlier canceled bout got infuriated and started throwing missiles.

Some jumped into the ring to wrestle the microphone from a musician, who was about to perform.

The fans insisted they paid to watch that particular Super Lightweight clash between Faisal Abubakar and Henry Mensah; hence cannot allow the event to end without that bout.

And to the surprise of everyone, a gunshot was fired.

A cursory look through the gunshot area located referee Barnor with what looked like a foreign pistol daring the angry youth to come forward.

This resulted in the throwing and swinging of chairs and other missiles against anyone on sight.

Roger Barnor was eventually pulled out of the action spot by some officials of the Ghana Boxing Authority as other fans deserted the ringside.

The only person left was the clerk of scales, the bellman and a few other officials in what appeared to be jotting down empirical evidence on what had transpired.

Roger Barnor had taken refuge in one of the media centers where the lighting and music were being provided for the event.

Soon, he was spotted by some of the angry fans who advanced in a bid to confront him but were prevailed upon to stop.

The last officials at the ringside then walked out of shot, signalling the official end of the event.

Moments after, some policemen walked in to verify the news they had heard.

Roger Barnor went down again to engage the police in conversation and walked them out of the ringside.

The debacle left behind broken chairs and tables.

There was no report of immediate casualty.