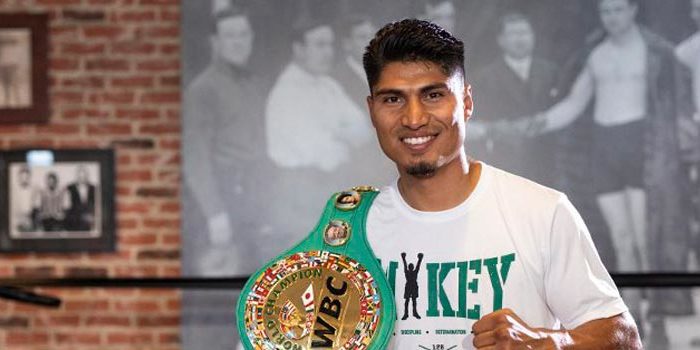 Mikey Garcia was already a rising star when his career came to a screeching halt in early 2014, with the next two years spent embroiled in a lengthy legal battle with Top Rank, Inc.

The unbeaten Californian has significantly made up for lost time since his July ’16 ring return, collecting three major titles in just five fights to become a four-division titlist. Everything he’s done leading to this point has already earned him accolades as one of the best pound-for-pound boxers on the planet, but he still sought bigger and better challenges.

It was his main motivation in seeking out unbeaten welterweight title claimant Errol Spence, Jr. Not only was Garcia willing to meet Spence in his Dallas hometown, but also in his natural weight division at welterweight.

“I think I need a fight like this to bring out the best in me,” Garcia (39-0, 30KOs) said during a recent media conference call of this weekend’s pound-fo-pound showdown, which airs live on Fox Pay-Per-View from AT&T Stadium in Arlington, Texas. “(Spence) resembles myself… a lot of this fight is almost similar to me.

“He does everything effective, he’s strong has good footwork and combinations. There’s nothing flashy about him… but he does everything well. I need someone like that to challenge me to the best of my abilities. That’s why I needed this fight. It’s rare that you get two unbeaten pound-for-pound fighters challenging each other.”

It’s even rarer when both are unbeaten and in the prime of their respective careers—and even more so when one of the participants is willing to move up two weight divisions to make it happen. It’s precisely the case for Garcia, who two fights ago dethroned previously unbeaten Sergey Lipinets to claim the lineal 140 pound championship before dropping back down to lightweight in a title unification win over fellow undefeated beltholder Robert Easter Jr.

In fact, Spence (24-0, 21KOs)—who attempts the third defense of the title he won in a May ’17 knockout of Kell Brook—represents the fourth unbeaten titleholder whom Garcia will face in a span of just 26 months. The odds are presently against the 31-year old four-division titlist to pull off a win this weekend, but doing so would surely catapult him at—or very close to—the top of any sensible pound-for-pound rankings.

Not that it has anything to do with why he pursued this opportunity.

“When I took on this fight and I wanted to get this fight, I was not doing it for any reason than to prove that I am the best,” Garcia insists. “I’m willing to go to welterweight and prove that I’m the best.

“If that puts me pound-for-pound number one, that’s just one more accolade. But there’s no other fighter doing what I’m doing. When you talk about pound-for-pound, I’m literally doing it, moving up and down in weight and winning these fights.”