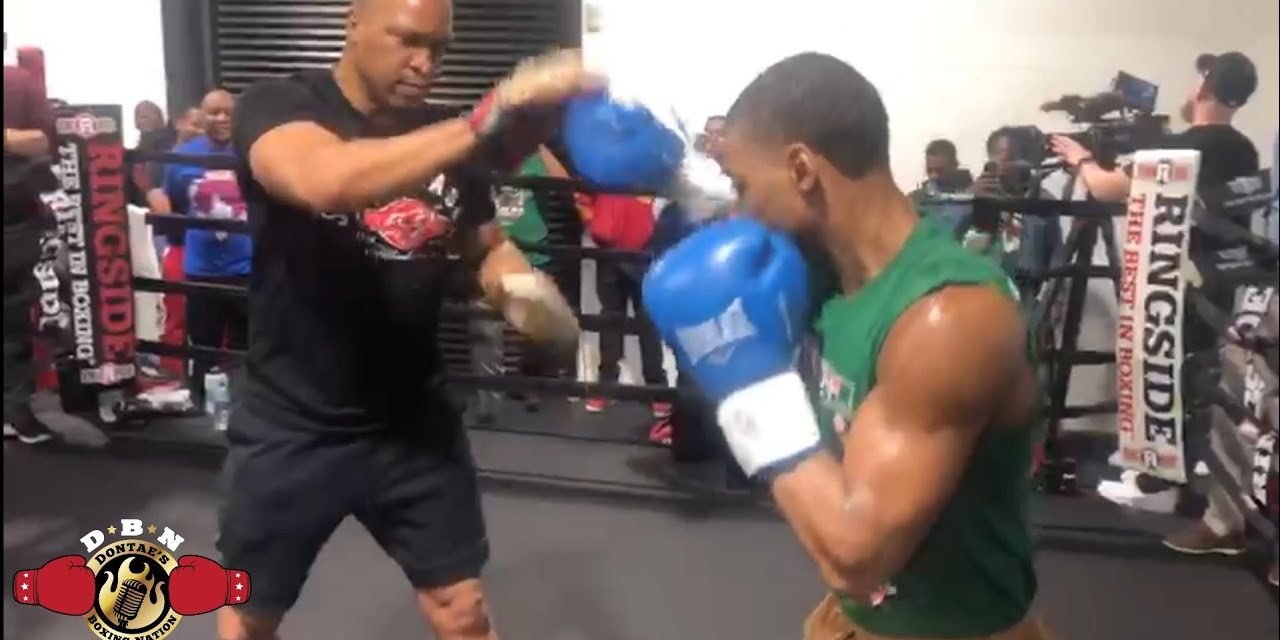 Tickets for this showdown, which is promoted by TGB Promotions and Ringstar Sports, are on sale now, and can be purchased at SeatGeek.com, the Official Ticketing Provider of AT&T Stadium.

Here is what the fighters and more had say Tuesday from the two media events:

“I’m really excited for this fight, especially to have it at AT&T Stadium. I’m 100% focused and ready for next week. This fight is going to have a bigger crowd, be more electrifying and will just be an amazing event overall.

“A lot of times when I’m in AT&T Stadium watching the NFL games, or watching Pacquiao fights or Canelo fights, the jumbotrons are so big that you get caught up looking up even when you’re ringside. It’s great because there isn’t a bad seat in the place with the jumbotron.

“This is definitely one of those crossover fights for me. Garcia is the biggest name to date that I’m fighting on American soil. It’s just great being so young in my career, fighting in my first pay-per-view and fighting with a guy like Garcia who brings over a different fanbase.

“You can tell how I looked ten weeks ago compared to how I look now. I’m not overlooking Garcia. I’m in tip-top shape, slim and ready. The difference is that now in a pay-per-view fight you have to be more dedicated and focused to promote the fight, showing that you are a star in boxing and sports media.

“If you know me and you know my boxing style, you know I’m never in a boring fight. Even if it’s just me beating up my opponent, or them just being hurt, I’m always going to try to stop my opponent and put on a spectacular performance.

“I put that pressure to look great on myself, not just because I’m undefeated or because everybody says this about me, I do it for myself to put on a great performance and a great show. I want to do that so great guys can look at me and think about if they want to fight me or not. That’s why a lot of guys don’t want to fight me.”

“A lot of people underestimate the power when they face me. They don’t see my physical size as a threat. But you know they feel the power once we’re in the ring and definitely change their minds.

“I’ve always said I’m better than him. Not by a lot, but just enough to beat him. He also reminds me of myself in a lot of ways, the way he fights, the way he is. He does everything well, good footwork, good speed, controls the fight at his distance that he likes… In a lot of ways, it resembles the way I fight. But I still feel that I’m better in every one of those ways and that’s what I’m betting on.”

“I’m extremely excited to be fighting in front of 40,000-plus people in the co-main event on March 16. It’s like a dream come true fighting at AT&T Stadium.

“I’m looking forward to going in and getting a knockout… I’ve been training extremely hard. Three months of training for this camp. It’s been good. I have like six pounds left to lose, so I haven’t struggled with the weight at all. I’ve been on a diet for at least three months now. The work has been done in and outside of the ring. Everything has been perfect leading up to this fight and I’m extremely ready.

“It was difficult (losing my title). I beat myself for that belt. In 2019, we are not taking any steps back, only forward.

“There are a lot of good fights I know that can be made. So, I am very excited to do my part and hopefully face-off against Anthony Dirrell, Caleb Plant or Callum Smith at the end of the year. I’m already in line to fight for the WBC title, but I’ve got to first take care of my job with J’Leon Love.

“I want to become the undisputed champion (at super middleweight). That’s my ultimate goal. Then I can talk about moving up. Right now, I want all the belts.”

“Right now, my career is all about putting in the work and my legacy. I’m not in this anymore for money. I love money, but I’m comfortable. I’m here for legacy. I want to leave something behind… I’m chasing a title.

“I feel mentally sharper now. Mentally I’m just relaxed in the ring. Some people are amped the whole round. But no, I know how to relax and work the ring and work my fight.

“The main thing this time around is I’m fighting a lefty and the first three or four times being in the ring sparring it’s a little different. It’s different angles and different punches… So that’s the main thing that’s probably the hardest part is lefties and getting used to it.”

“I just think Errol is so hungry and he has the ability to be great. The way he adjusts in the fights and he really sets the tone. Most of all, his fights have been one-sided. Regardless who he’s fighting against, how great they are, what their record is, what they said they’ll do to him, he’s just been able to have one-sided affairs. Hopefully we can have the same thing in this fight.

“This has been a tremendous training camp. I’ve seen how hard Errol has worked and how motivated he is. He’s extremely confident, and rightfully so. On March 16, I know Mikey is going to come prepared, but so are we. Whatever Mikey brings into the ring, we’re going to have the answer.”

“Mikey has been there before in many championship fights. Obviously, this is the biggest challenge against a bigger, heavier guy. But at this point in training, I think we’re in great shape. We know (Errol) is going to be the heavier guy in the ring, but he’s not going to be the better or smarter guy.

“We’re going to fight a technical fight, especially in the first few rounds, to figure out what Errol Spence is brining into the fight. But if we have to back him up and fight on the inside, then we’re going to do what’s necessary.”

“FOX is really putting their weight behind boxing, and you’ve seen what that meant for other sports. When UFC got involved with FOX, you saw how it elevated the sport of MMA and UFC… FOX is doing the same thing now on the boxing side and I really believe it will elevate boxing. It brings the general market to this sport, and I think that’s what we’re going to see here with this pay-per-view.