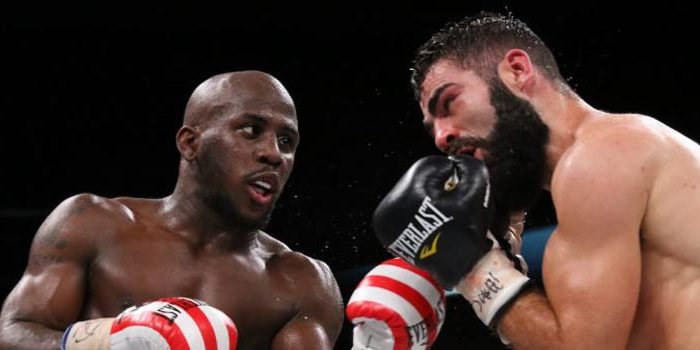 Tevin Farmer was the first Philadelphian to defend a major title in his hometown since Bernard Hopkins brought home his middleweight championship nearly 16 years prior.

Unlike Hopkins’ night of having to chase down a fleeing Morrade Hakkar, Farmer found a willing challenger in Jono Carroll, outlasting the Irishman to take a 12-round decision in a terrific title fight Friday evening at Liacouras Center in Philadelphia, Pennsylvania.

Scores were 117-111 (twice) and 117-110 in favor of Farmer, who made the third defense of his super featherweight title in the DAZN-streamed main event.

“I outboxed (Carroll) when I wanted, I outfought him when I wanted to,” Farmer insisted after the contest, which marked his first fight in Philadelphia since an April ’17 showcase fight in this very arena. “Nobody likes to get hit, but I had to see where his heart was at.”

Carroll’s heart was certainly in the right place. The unbeaten challenger backed up every bit of his extensive trash talk in the early rounds of his U.S. debut and first career title fight. The Irish southpaw forced a frenetic workrate, averaging more than 100 punches per round over the course of the contest.

Farmer turned the tide and reeled in the hometown crowd in round three, working on the inside and scoring with uppercuts. Carroll did his best to keep pace, but for the first time in the fight was unable to time Farmer’s elusive defense.

Two-way action resumed in round four. Carroll regained his bearings, throwing three to land one in his best effort to offset Farmer’s superior defensive skills. The strategy came at a price, as Carroll was beginning to punch himself out while Farmer showed no signs of slowing down.

Farmer drew oohs and ahhs from his adoring local fans in round five, landing a right uppercut which dislodged the mouthpiece of Carroll. Time was called but didn’t at all change the direction in momentum as Farmer punched with far more conviction while not showing any concern over the weakened incoming from his challenger.

Carroll sought to reclaim control at the start of the second half, clearly outworking the defending titlist but what little he was able to land not having any real effect. After dancing his way through round seven, Farmer closed the gap and sliced away with uppercuts and right hooks on the inside in a round eight fought entirely at close range.

Heading into the championship rounds, Carroll was forced to fight through fatigue as well as a worsening cut around his right eye. The Dubliner dug deep in round 11, scoring with a right hand to briefly slow down the defending titlist and seemingly turn the tide.

Farmer wasn’t about to let a visiting challenger show him up in his own hometown, however. The local southpaw connected with a left hand and monster right hook that had Carroll in trouble for the first time in the fight. A follow-up volley of punches prompted a rise from the rabid crowd on hand, but Carroll managed to weather the storm.

The 12th and final round saw both fighters give all of whatever they had left in their respective gas tanks. For Carroll, it was barely above running on fumes while Farmer was still landing the far more effective punches.

It was reflected on the final scorecards, giving Farmer the landslide win. The 28-year old southpaw improves to 29-4-1 (6KOs), having now racked up four title fight victories in a span of less than eight months.

Carroll suffers his first career loss, falling to 16-1-1 (3KOs). He is now winless in his last two starts, having fought to a draw in his last contest but still being permitted to fight for the title as Farmer sought to remain active while in pursuit of bigger game.

On his side, it’s hoped to come in the form of a title unification clash with unbeaten southpaw Gervonta Davis. The knockout artist from Baltimore has engaged in a war of words with Farmer, both in person and more extensively through social media.

His boxing alignment, however, makes him a difficult commodity to secure. Davis fights under the Premier Boxing Champions (PBC) banner and is under contract with Mayweather Promotions. It makes him off limits in terms of DAZN brass and promoter Eddie Hearn pursuing him directly.

That said, a significant offer is being prepared to bring home such a clash with Hearn planning to present Davis’ handlers with a $5 million offer.

The trick, of course, would be to make sure Farmer is properly compensated for the fight he’s always wanted, in the event Davis accepts.

“I don’t really care,” Farmer stated on whether or not the fight actually happens. “I handled business tonight. Everybody knows what Gervonta has been offered. We’ve been building that fight since 2014 so it needs to work for both of us.

“Yes I do want Gervonta Davis, but the business side got to be right.”

For one more night in the ring, the boxing side was alright for Farmer, who extends his unbeaten streak to 23 straight.