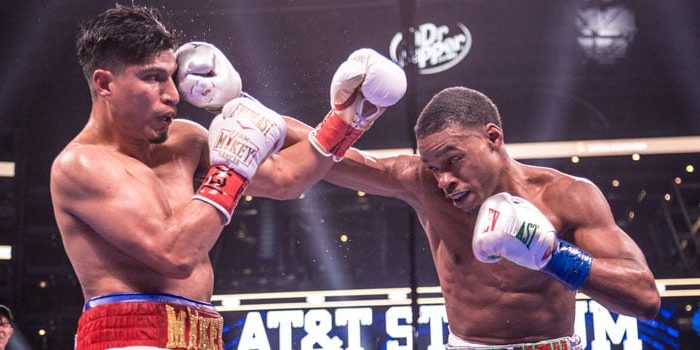 In a stadium full of stars—ringside and seemingly on anything that could be branded—one shone brighter than the rest. Errol “The Truth” Spence Jr. wasn’t just the bigger man against Mikey Garcia, he was the better one. Spence retained his IBF World Welterweight Championship in dominant fashion, shutting the courageous Garcia out on all three cards to win a 12-round unanimous decision.

Garcia looked to cement his Hall of Fame credentials by winning a world title in his fifth weight class. Spence, the natural welterweight, was expected to use size and strength advantage to counter Garcia’s perceived advantages in speed, skill and ring IQ. Instead it was Spence who was superior in all categories, keeping Garcia (39-1, 30 KOs) on the end of his southpaw jab all night and working him over to the head and body.

“Throughout training camp, a lot of commentators thought he was too smart and I couldn’t box as well as him,” Spence said afterward. “I showed I can box and I can move my head if I want to.”

Both fighters exuded confidence as they made their way to the ring, and both had plenty of support in the home of the Dallas Cowboys. Spence took control of the ring space in the first, stepping forward behind a strong jab, perhaps his most underrated weapon.

Garcia’s best round was the second, when he landed a clean right and backed Spence up with combinations. The third featured more two-way exchanges. Spence’s jab, however, continued to land cleanly, stifling Garcia’s attack. When Garcia did let his hands go, Spence deftly avoided the shots, using a variety of defensive maneuvers.

Spence’s activity grew with each passing round as Garcia’s decreased. The former landed a number of punishing shots during the second half of the bout. Garcia showed grit under an assault that would’ve withered most welters.

Spence pushed for the knockout in the championship rounds, but it wasn’t to be. A series of combinations staggered Garcia in the ninth, but the Oxard, California product displayed a steel-chin, weathering a furious assault.

“I give Mikey Garcia all the credit for taking this fight,” said Spence. “Mikey and I put on a great show in front of all these lovely fans. I respect him so much and I appreciate him for stepping up.”

As the onslaught continued in the championship rounds, trainer Robert Garcia, asked his brother Mikey if he could go on. The proud champion answered in the affirmative. But this was Spence’s night; a strong case was made to place him as the world’s best fighter, pound for pound.

Garcia was gracious in defeat.

“He came out here with a good game plan and kept the distance at his favor. I couldn’t get my rhythm going and he did what he had to do. I tried to make adjustments and he kept executing.”

So, what’s next for Spence? Afterward he called for unification versus either Pacquiao or Porter. No telling what the future holds but, on this night, it’s Spence who stands atop the boxing world.

Watch out, super middleweight division—David Benavidez is back. Fighting for the first time in 13 months, Benavidez looked as good ever, registering a stoppage over J’Leon Love at 1:14 of the second round.

Benavidez, 21-0 (18 KOs), flashed elite skill and power in under five minutes of work. The sky is the limit for the ultra-talented 22-year-old.

Love, 31, 24-3-1 (13 KOs), got off to a hot start in the first, working Benavidez’s ribcage. The tide turned when Benavidez landed his first hard shot, a short counter left hook. Love staggered across the ring. He went to the corner at round’s end sporting a cut over his left eye.

Benavidez, poised beyond his years, calmly went about his business in the second. A right cross had Love out on his feet. The Phoenix, Arizona native unloaded a flurry of power shots, prompting referee Laurence Cole to mercifully stopped the action.

“It’s a dream come true to fight on this stage in front of these fans,” Benavidez said afterward. “These fans give me the motivation to get up every day and go the extra mile.

“I expected to knock him out, but when I hit him with the first good shot, I knew he wasn’t going to last. I tried to pace myself, but it wasn’t necessary tonight.

“I saw Anthony Dirrell with the WBC belt. He can’t call himself champion until he fights me. That’s my belt. I’m going to go get it. It’s mine.”

McJoe Arroyo was game but outgunned versus the hard-hitting Luis Nery. Nery’s deadly power and combination punching produced four knockdowns, forcing Arroyo to retire in his corner prior to the start of the fifth round.

Making his US debut, the undefeated Nery (29-0, 23 KOs) was determined to put on a show. A left cross dropped Arroyo in the second. He rose quickly, fighting off a Nery searching for the finish. In the third, Nery maneuvered Arroyo to the ropes, setting him up for a four-punch volley that felled him a second time. Again, Arroyo rose and battled back, but his face was showing signs of wear; his body weakening.

Another Nery combination dropped Arroyo (18-3, 8 KOs) in the third. Two more knockdowns in the fourth convinced the former IBF world super flyweight champion to call it quits before the start of the fifth.

“I’m happy to start on the right foot here in my U.S. debut and show everyone I’m still the best. We’re going to train hard and hopefully by June, we’ll have the belt back,” said Nery, who was stripped of his WBC world bantamweight title in March 2018 after failing to make weight prior to his second-round destruction of Shinsuke Yamanaka.

Chris “The Nightmare” Arreola (38-5-1, 33 KOs) made short work of Jean Pierre Augustin, dropping him in the third round and ultimately putting him away at 2:03 of the stanza.

It was Arreola’s second consecutive victory since ending a 29-month layoff last December. Southpaw Augustin enjoyed a solid first, using combinations and footwork to keep the stalking Arreola at bay. At one point, Arreola stood in the middle of the ring and yelled, “Let’s go, son!”

Following a second featuring much of the same, Arreola picked up the pace in the third. A hard right followed by a left sent Augustin stumbling across the ring. The ensuing combination drove him to the mat. Augustin rose on wobbly legs. Arreola pounced, rocking Augustin’s head back with combinations until referee Neal Young stepped in for Augustin’s first pro loss. He is now 17-1-1 (12 KOs).

“Prince” Charles Martin upped his record to 26-2-1 (23 KOs) when referee Mark Calo-oy disqualified Gregory Corbin in the eighth round for repeated low blows. Aside from several moments in the fourth—when he suffered a cut over his left eye—Martin controlled the action, consistently landing his left in each frame. Corbin’s only response was to hit low. He was deducted three points before the fight was stopped, dropping him 15-1 (9 KOs). Official time was 0:53.