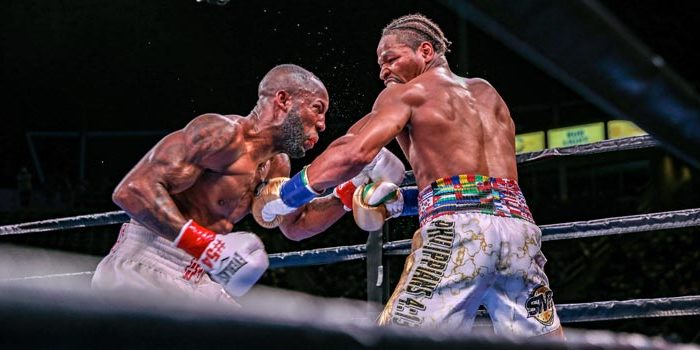 “Showtime” Shawn Porter was minus a few strands of hair, though it didn’t hamper any of the WBC welterweight world champion’s flare. Porter flashed that megawatt smile and a prescient reminder to his top-rated challenger, Yordenis Ugas, the Cuban expatriate fighting for a world title the first time, that in the end, “and still” would be uttered when their fight concluded.

It said so in big, bold yellow print outlined in thin black emblazoned across Porter’s gum shield: “And Still.”

The gum shield was prophetic. After 12 rounds, Porter retained his title, winning a tight split decision in the main event of PBC on FOX at the Dignity Health Sports Park in Carson, California.

“The crowd was expecting a big brawl, but that’s not the way this fight needed to go tonight,” said Porter, who had to cut some of his braids during Friday’s weigh-in to make the 147-pound limit. “That style that we used left the fight close. We got the win, we’re still champion and we’re looking forward to what is next.

“The weight cut didn’t affect me at all. I was on my toes all night. I was very focused the entire fight and just listening to my corner.”

In the first round, Porter, bouncing up on his toes as he usually does, waded into Ugas and drilled him with rights and lefts to the body. Ugas, content on staying on the outside and flicking his jab, closed the round with a right to the body.

Ugas (23-4, 11 KOs) was slightly more aggressive in the second, walking Porter down behind the jab. That didn’t deter “Showtime,” who proved to have the faster hands early on.

Ugas continued to play the role of stalker in the third, working Porter’s ribcage and measuring him with his stick. Porter was content to fight on the inside, pumping a double jab and stepping in with quick combinations.

Ugas enjoyed a solid fourth, landing downstairs and countering Porter with rights to the jaw. The fifth featured more of the same. With 1:15 left in the frame, Ugas landed an overhand right that got Porter’s attention. But Porter closed the round with a flurry of punches, several landing cleanly. Ugas threw his arms up as if defiantly saying, “Here I am, try me again.”

Porter was the busier fighter in the middle rounds. Ugas’ blows were effective, particularly to the body, but he was outworked by the champion. While the Cuban appeared to have a bloody mouth, both of Porter’s eyes were beginning to swell.

Ugas came alive in the tenth, landed a series of left hooks which opened a cut in the corner of the right eye. Porter continued to work, making the rounds difficult to score.

Porter showed no signs of fatigue working in the 11th, bouncing on his toes. But Ugas was busier now, closing the gap and working combinations. Porter might’ve won the stanza when a left jab caught the Cuban flush, causing him to stumble backward as the bell sounded.

“We wanted to out box him and eventually turn it on and press him,” Porter said. “But my dad did not think that was the smartest way to win the fight. We fought this way for 12 rounds and no one has ever seen that from me before.

Ugas controlled the action in the 12th, landing a series of power shots on a now-inactive Porter. In the end, Porter successfully defended his belt for the first time in what was a tough scrap.

“I showed tonight that I belong with the elite fighters at welterweight. All I can say is that I’m ready to fight any of the top names in the division. I’ll be back.”