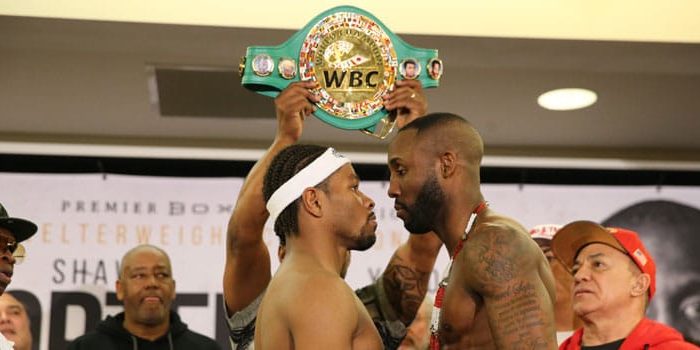 Whether that remains true by the end of Saturday’s showdown with Yordenis Ugas remains another matter altogether.

The two-time welterweight titlist initially weighed 148.8 pounds ahead of his mandatory title defense but managed to get down to 146.8 on his second try in order to avoid losing his belt at the scale.

“I don’t know what happened (the first time),” Porter (29-2-1, 17KOs) said of initially missing weight. “I think I just got started late on the process (of cutting weight during fight week).”

With the scale drama out of the way, Porter is set to square off with Ugas, live in primetime on Fox TV (Saturday, 8:00pm ET/5:00pm local) from Dignity Health Sports Park in Carson, Calif.

Upon his failed first attempt, Porter was granted two additional hours by the California State Athletic Commission to get down to the contracted 147-pound limit. The Ohio native—now based in Las Vegas—used the full time slot and even resorted to having his braids cut off in leaving no stone unturned.

It worked out for the best, as he is now prepared to make the first defense of the title he claimed in a 12-round win over Danny Garcia last September in Brooklyn, New York. The win marked his second tour as a welterweight title claimant, his previous reign lasting just eight months and just one successful defense before conceding the crown to Kell Brook in an Aug. ’14 loss.

The stakes for Saturday’s bout have significantly been raised by what lies ahead. As previously reported by BoxingScene’s Keith Idec, waiting in the wings is a potential rematch with unbeaten titlist Keith Thurman, who defeated Porter in June ’16 and will be serving on the live Fox broadcast.

Ugas (23-3, 11KOs) made weight on the first try, clocking in at a trim and fit 146.6 pounds for first crack at a major title. The Cuban native—who lived in Miami before relocating to Las Vegas—enters on the heels of an eight-fight win streak since returning to the ring in 2016 following a two-year break to clear his head.

Friday’s weigh-in went a long way in boosting the spirits of an already supremely confident challenger.

“I’ve already won the first round,” Ugas said of Friday’s scale drama. “I did my job.”

The next step for the 2008 Olympic Bronze medalist: upset the odds and ruin Porter’s weekend—and future plans—altogether.

“I’ve been waiting nine years for this moment,” states Ugas. “On Saturday night, we will hear ‘And the new.’”