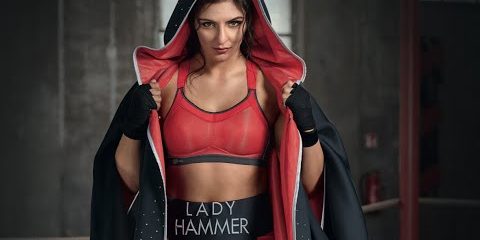 Germany’s Hammer has held a middleweight world title since 2010, defending it numerous times including in her U.S. debut last June on SHOWTIME in which she defeated Tori Nelson. Now she looks to stamp her name in the history books in this matchup against Shields that many are calling the most significant fight in women’s boxing history.

Tickets for the live event, which is promoted by Salita Promotions, are priced at $150, $100, $55 and $35 and can be purchased through Ticketmaster and at boardwalkhall.com.

Here are highlights of what Hammer had to say as we head into fight week for this historic event:

How excited are you about fighting in the U.S.?

Christina Hammer: “I’m really excited about it because this is a very big fight. I can’t wait to get there, step into the ring and put on a great performance.”

What does this fight mean to you?

CH: “This is going to be the biggest women’s fight in history. We’re both champions, she has Olympic gold medals and other accolades, so with all of that combined, it’s going to be a game changer for our sport.”

What do you need to do to win?

CH: “I’m a long time champion and I know what to do in the ring. I know I have the skills to beat her. I have great foot work and my goal is to beat her badly.”

What do you think of Claressa inside and outside of the ring?

CH: “Claressa has obviously accomplished a lot going back to the Olympics. This is a big step for her and I think it’s going to be a challenge for her. As a person, she’s just my opponent, that’s all.”

Can you describe your style of fighting and what fans can expect on April 13?

CH: “I’m tall for my division so I use my reach. I have great footwork and technique and power and I want to show off all those skills. I’m going to show that Christina Hammer is a great champion. I like to play with my opponent, and when the moment is right, I beat her down.”

Can you talk about your experiences as a fashion model and why that’s important to you?

CH: “I like modeling because it’s a different part of me. You can be more feminine and athletic. I did my first shoot three years ago and I had never done anything like that. I’ve worked on my skills there too.

“To be a model is an easy job, it just gives me confidence. Being a fighter is hard. You have to give everything, because in the ring you can’t run away. You have to fight and defeat someone.”

Would you ever want to compete in another sport?

CH: “I don’t know. Boxing is the best sport to me. It’s my passion. I give everything to the sport and my dream now is to be successful in America.”

Is there anyone in boxing history you’d have loved to fight?

CH: “Laila Ali was a great champion and If I fought her that would be a great fight.”

Do you see women’s boxing as a sport on the rise?

CH: “Yes, it’s really grown in recent years. There are more fights on big platforms for us and I think this is just the start.”

Would you recommend for other women to go into boxing?

CH: “Boxing is a great sport. You need technique, intelligence and it makes you feel more confident. If something happens, you can take care of yourself. It’s the best workout and I suggest it to everyone.”