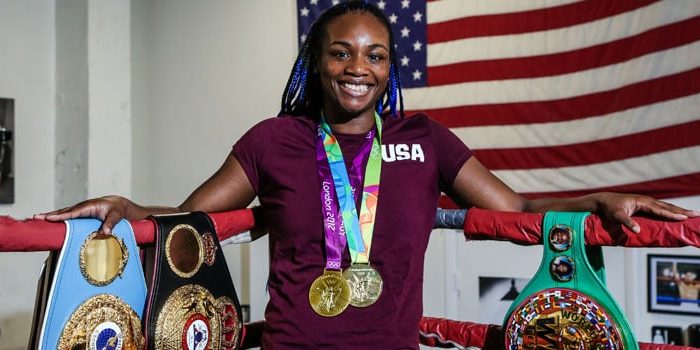 The two-time Olympic Gold Medalist Shields and unbeaten Hammer will look to become the sixth fighter in history to unify all four major world titles in the main event of a SHOWTIME BOXING: SPECIAL EDITION (9 p.m. ET/PT).

Tickets for the live event, which is promoted by Salita Promotions, are priced at $150, $100, $55 and $35 and can be purchased through Ticketmaster and at boardwalkhall.com.

Shields has been training in Florida for the last week with her trainer John David Jackson, after spending the previous five weeks at the U.S. Olympic Training Center in Colorado. Here is what Shields had to say Thursday:

“Christina doesn’t know what’s coming for her. I’m going to break that Hammer in half.

“When we’re in there, it’s about who punches harder. This is a real fight. Just because she has height, doesn’t mean she’s going to dictate what happens. She’s going to have to do a lot to keep me off of her.

“I have two Olympic Gold Medals, three belts and more coming. I’ll have all the titles at the end of the night on April 13.

“I work hard, really hard. If I was a man, I would probably be one of the most famous boxers out there. There is a gender gap. We all know it. I’m working towards changing that. We work hard, we get less money and less recognition, but the world is changing. We are changing it.

“Hammer has been talking smack but I’m not worried about her. I’m just ready for a fight. She talks about a lot of stuff that has nothing to do with boxing. I’m waiting for her to say she’s going to hit me with an uppercut or something, but it’s more of the same.

“Being here in Florida to finish up camp has really been ideal. I’ve still been working extremely hard, but here I have a little extra space and sunshine. It was time for some new scenery in camp and I think this was the perfect move to take me into fight week.

“I’ve been working on my ‘Ali shuffle,’ this gym inspired me. Don’t be surprised if you see me break it out during the fight. I’ve got some tricks up my sleeve. At the press conference there will be some surprises too — I have an outfit picked that is going to steal the show.”

“This fight is long overdue and I’m just glad I’m going to get my chance to show her what a real champion is. Someone is going down on April 13 and I promise it’s not going to be me.

“People can say they’re not paying attention to you and not studying you, but they’re lying. I’m glad she’s looking at me closely though. Hammer flew one of my friends out there to be a sparring partner, not even knowing that she hasn’t sparred me in years and knows nothing about me. It makes me know I’m on her mind. She can spar with Ann Wolfe and she still isn’t going to beat me.”