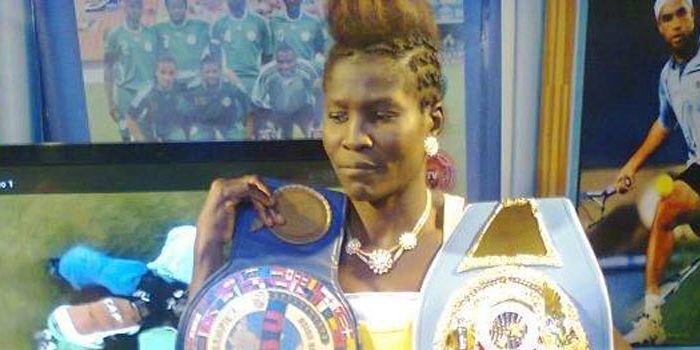 Nigerian-born female boxer, Helen Joseph, popularly known as “The Iron Lady,” has challenged her counterparts in the United States to a fight, saying she is ready to knock out her competition.

The former IBF champion in the featherweight division said during a courtesy visit to the Nigerian Consul General in New York, Mr. Benayaogha Okoyen, that she wanted to put Nigeria on the world female boxing map.

Joseph, also nicknamed “The Princess of Africa” in her boxing world, had three different boxing titles: the WBF, IBF, GBU but she confessed her opponents were afraid to come out to fight her.

She ranks among the top in the world of female boxing and has five weight classes – flyweight 115, bantamweight 118, super bantam 112, featherweight 116 and any other super featherweight 129.

“In these categories, all these female boxers are running, they don’t want to fight me. When I was back in Africa, they were reigning all over the U.S. and they were unbeatable.

“But ‘The Iron Lady’ has arrived and everybody has run away, nobody wants to fight. I mean I’m knocking on their doors and they don’t want to come out. What’s wrong with you girls?

“So, all these while you have been fighting cheap opponents, now that I have arrived, nobody wants to show face,” Joseph said.

“But I will bring them out because they have what I need, they have all the titles that I desire.

“I will keep collecting those titles from them and pack them because I know they will not take it from me.

“I want that message to go out there and let them to know that I remain the ‘Iron Lady’, the ‘Princess of Africa’ and I fear nobody,” Joseph taunted her competition.

According to her, however, there is the need to fight a world title on the Nigerian soil so as to put the name of her country on the world’s boxing map.

The Rivers State-born boxer said in the history of female boxing in West Africa, she was the first woman who had travelled to different countries and won three world titles.

“I also won two awards in boxing and I have fought for two world titles in two countries that I’m sure I won because I knocked down all my opponents but they robbed me because I travelled to their countries.”

Joseph shared her ultimate dream: “One support I want from my government is to promote my world title fight in Nigeria. I want to go back home. I want to fight in my own country.

“I want my country to watch the kind of action and power God has given me. The fight I want Nigeria to sponsor for me is the World Boxing Organization.

“If I have a sponsorship, I’m supposed to fight on June 10 in New York City. Then I will go back to Nigeria to defend the title.

“So that’s why I want my country to support me so I can fight my opponents on the Nigerian soil and take back what belongs to me.

“I am proud of Nigeria and I love my country. Even when I was in Ghana, I used the Nigerian Passport and everyone asked me to change my passport to Ghana’s passport but I refused.

“I know Ghana loves me and supported me a lot; Ghana is my second country,” she said.

The Nigerian Consul-General, said Nigeria would be very happy to support any of its talented stars like Joseph, to succeed, adding, it will be our pride and joy.

Okoyen added: “We are happy that you are making our country proud, you are making the female world proud and whatever we can do as a Consulate, as Nigerians, as a Government, we will continue to do.

“We will continue to support your activities and others who are making Nigeria proud. Nigeria is proud of the feat you have attained so far. We like your spirit and where you’re going.”

Joseph’s Manager, Devonne Canady, described her talent as superb, adding, they were talking with the Federal, Lagos and Rivers State Governments to sponsor Joseph’s fight.

“She’s the hardest worker that I’ve ever met in boxing and I’ve been in boxing for a long time. She trained hard, I love her and I’m committed to her success,” Canady said.

Prof. Joseph Shipley from Columbia University, said Joseph should be the Anthony Joshua female boxer adding, “she had turned professional, she’s fought for the world title around the world”.

“She is a champion; she is one of the most feared fighters in the world but she hadn’t had enough promotions.

“Right now, Nigeria has incredible top talents in the arts, in sports around the world and she is of that caliber, she’s a top global athlete.

“She can do a lot; she wants to represent Nigeria. She’s an incredible personality, she’s not just a talent, she’s got charisma. Everybody needs to know she’s a star,” Shipley said.