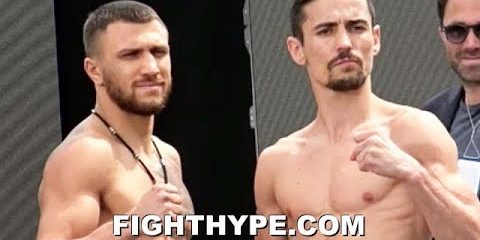 The fighter known as “Million Dollar” officially got that opportunity Thursday after he and Vasiliy Lomachenko made weight for their WBO/WBA lightweight title fight at Staples Center on Friday.

Crolla, an 18-1 underdog, came in at 134.8 pounds. Lomachenko, who’s regarded by many as the best pound-for-pound fighter, stepped on the scale at a chiseled 134.4 pounds.

“It would mean the absolute world to me,” Crolla said if he’s able to complete the upset. “It would be one of the biggest upsets in British boxing history. It would change my life, it would change my family’s life, and I go down in history.”

Crolla, 32, is on a three-fight winning streak since dropping two straight to Jorge Linares.

Lomachenko, 31, recorded a technical knockout over Linares last year to capture his first of two lightweight titles. He added the second belt after a unanimous decision against Jose Pedraza in December.

There’s talk of Gilberto Ramirez facing Callum Smith in the near future for a super middleweight unification bout, but before getting to that fight, Ramirez wants to test himself at light heavyweight.

Ramirez stepped on the scale at 174.6 pounds for his light heavyweight debut against Tommy Karpency, who also weighed 174.6 pounds. The co-main event between Ramirez and Karpency will open the ESPN+ card at 11 p.m. EST/8 p.m. PST.

“I proved myself at 168 pounds and now I’m going to 175 pounds to demonstrate I’m the best,” Ramirez said in Spanish. “My body was telling me it’s time to take a break at 168 and conquer the next weight class and become a champion at 175.”

Ramirez, 27, said he’s not looking past the veteran Karpency, 33, but he’s hoping to land a title shot against a light heavyweight champion or unify at super middleweight for his next bout.

“I know what Karpency brings, but after that I’m ready for any champion,” Ramirez said.

The 10-round junior welterweight bout was made official after both fighters made weight. Barboza, 27, tipped the scales at 140 pounds and Alvarado, 38, came in at 139.6 pounds. The bout will headline the undercard portion of the event, which will stream on ESPN+ at 8 p.m. EST/5 p.m. PST.

Barboza’s previous fight was the co-main event on a card headlined by Ramirez, but Barboza said this fight feels bigger because it’s in his hometown and against a former champion.

“Being from South El Monte, I’ve always wanted to fight at Staples Center,” Barboza said. “It’s a big venue and I have so many people coming out to support me.”

Besputin stepped on the scale at 147 pounds, and his opponent Alfredo Blanco also made weight at 146.4 pounds. Besputin, who’s managed by Egis Klimas, has a perfect 12-0 record with nine knockouts.

With Top Rank having limited options at welterweight, there’s already talk of Besputin being a potential opponent for Terence Crawford. But for Besputin to land that lucrative bout, he’ll need to continue to impress, starting with Blanco on Friday.