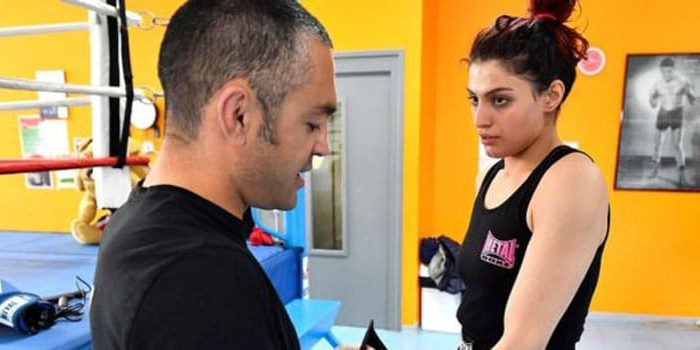 Sadaf Khadem, an Iranian who became the first woman from her country to contest an official boxing match, says she has cancelled her return home from France after hearing a warrant had been issued for her arrest.

Khadem beat the French boxer Anne Chauvin in an amateur bout on Saturday.

She had planned to fly to Tehran with her French-Iranian trainer this week.

Khadem was quoted by a sports newspaper as saying she believed she was accused of violating Iran’s compulsory dress code by boxing in a vest and shorts.

Iranian officials have not commented, but the head of Iran’s boxing federation denied that Khadem would be arrested if she came home.

“Ms Khadem is not a member of [Iran’s] organised athletes for boxing, and from the boxing federation’s perspective all her activities are personal,” Hossein Soori was quoted as saying by an Iranian news agency.

Khadem fought in a green vest and red shorts with a white waistband – the colours of Iran’s national flag – in Saturday’s bout in the western French town of Royan.

The 24-year-old had to fight abroad as, despite having the blessing of Iranian sporting authorities, it proved too complicated to fulfil their requirement that the bout be refereed and judged by women.

Khadem had been expecting a hero’s welcome when she returned to Iran.

But while she travelled to Paris’s Charles de Gaulle airport with her trainer Mahyar Monshipour – an Iranian-born former World Boxing Association champion who also serves as an adviser to the French sports minister – she said they were told that warrants had been issued for their arrest.

“I was fighting in a legally approved match, in France. But as I was wearing shorts and a T-shirt, which is completely normal in the eyes of the entire world, I confounded the rules of my country,” she told the L’Equipe newspaper.

“I wasn’t wearing a hijab, I was coached by a man – some people take a dim view of this.”

A spokesman for the Iranian embassy in Paris told Reuters news agency on Wednesday that he could not comment on whether Khadem faced arrest in Iran or on her decision not to return to Iran.

Under Iranian law, women and girls as young as nine years old who are seen in public without a headscarf can be punished with a prison sentence of between 10 days and two months, or a cash fine.

Iranian sportswomen are required to cover their hair, neck, arms and legs when competing.

Until recently, Khadem would not have been permitted to take part in an official boxing match wearing a hijab or a full body form fitting uniform for religious regions. But the International Boxing Association (AIBA), amateur boxing’s governing body, changed its uniform rules at the end of February.