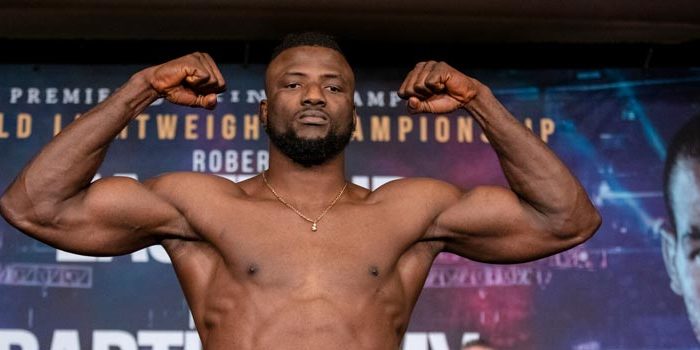 Houston, Texas is a far cry from Ughelli, a town in southwestern Nigeria. No one knows that better than heavyweight prospect Efe “The One and Only” Ajagba (9-0, 8 KOs).

Ajagba is set to the return to the ring this Saturday, April 27, against Michael Wallisch at the Cosmopolitan of Las Vegas. The bout will open the televised portion of the Robert Easter Jr.-Rances Barthelemy main event on Showtime (10:00p.m. ET/7:00 p.m. PT).

Ajagba has come a long way—literally and figureatively. He immigrated from Nigeria to the United States in 2017, settling in Houston after turning pro.

“You can’t compare Nigeria with America,” Ajagba said. “In Nigeria, there aren’t many jobs. So many people are suffering. In America, people have more opportunities.”

For international fighters who move to America, the choice of where to live is typically decided by the location of their head coach’s gym. Efe is no exception. Houston is home to elite boxing coach Ronnie Shields, who operates out of the Plex Boxing Gym.

“I think of Ronnie as my dad,” Ajagba said. “I’ve been living in America for two years this June. When I first came to America, Ronnie would take me out to eat and things like that. We’re always laughing, having a good time in the gym. He just makes everything go smooth.”

Shields is a distinguished veteran of the sport, having fought as a pro from 1980-1988 following an impressive amateur career. Over the years, Shields has worked with some of the top fighters in boxing, including Evander Holyfield, Pernell Whitaker, and Mike Tyson. In addition to Ajagba, Shields currently trains Jermall Charlo and Cuban sensations Erislandy Lara and Guillermo Rigondeaux.

“Ronnie Shields is a very good trainer,” said Ajagba. “He’s trained so many heavyweights, so many good fighters in general.”

The sport Ajagba originally participated in was soccer, but he left it to pursue boxing eight years ago. Ajagba went to the gym and trained following long days of working in a bakery to earn money for his family. He won a gold medal at the African Games and a bronze at the 2014 Commonwealth Games.

That win earned Ajagba a spot on the 2016 Nigeria Olympic squad. Thanks to his amateur experience, Efe has always strived to hone his technical abilities rather than relying solely on his power or size.

Now, under Shields’ tutelage, Ajagba continues to do so, perfecting the fundamentals. Only nine bouts into his career, he has demonstrated an educated jab as well as a variety of punches that he throws with unpredictable timing.

“Back in the day, I didn’t have a great jab,” Efe said. “Ronnie has taught me how to use the jab properly and helped make it special. He taught me to make use of my height; I’m 6-foot-6 so I have good range. My jab is very strong, and when I use it, my opponent gets very confused. He doesn’t know where the punches are coming from.”

Part of what makes Ajagba’s skillset different from many modern heavyweights, however, is the fact that he doesn’t just use a jab and a right hand. His hooks and uppercuts are devastating not only because of Efe’s power, but because he throws them at the right time. Ajagba likes to set traps for his opponent, creating openings that enable his shots to land with more impact.

Efe is honest about his mindset on fight night as he walks to the ring. Some boxers say they are perfectly calm before a match, but Ajagba isn’t buying it.

“Every fighter is nervous when they walk to the ring. When I step into the ring, I don’t get intimidated by this man because I concentrate on what I’m going to do—because I trained for the fight, I’m well-prepared. That’s the only thing that can take your nerves away.”

Outside the ring, Efe maintains a strong bond with his family back in Nigeria.

“I have family back home—my parents, my two younger sisters, and my older brother. So, I’m the youngest boy. They are super happy about my performances and how I’ve been knocking people out. I talk to all of them a lot. My coach back home who taught me to box, my family, everyone back home.”

He added, “They will come to America to watch me fight when I fight for a title.”

Since moving to the United States, Ajagba has traveled to several cities for his fights. His favorite so far may not be what one would expect.

“I love Houston,” Efe said. “It’s the best place for me to train. I know a lot of people like New York, but it’s very busy. There are so many people, and everybody walks everywhere. In Houston, there isn’t a lot of walking. Everybody has their own car. And there are a lot of Nigerians living here.”

As a heavyweight, Ajagba doesn’t have to worry about cutting weight. He has the luxury of eating what he likes—within reason.

“My favorite food is Nigerian food. When I was in Nigeria, I didn’t know how to cook. My mom and my sisters cooked. I was training, so when I came home, they knew how hard I’d been working and would want me to rest, not to cook.

“When I came to America, I had to learn how to cook. So, I cook my own Nigerian food now, but once in a while I’ll go out and eat American food.”

The rare times when Efe is not training, he takes a little down time to watch his other favorite sport on TV.

Looking to the future, the 25-year-old is clear regarding his goals.

“My biggest dream is to be heavyweight champion. That’s what I’m training for—it will change my life. Every day, I don’t miss any training and I think about that championship. That’s how you get somewhere.

“When I start making a lot of money, I want to help other boxers from Nigeria come to America to box here. In Nigeria, it’s very difficult.”

As far as a message for the fans ahead of his fight on April 27th, Efe laughed. “They have to wish me good luck!”