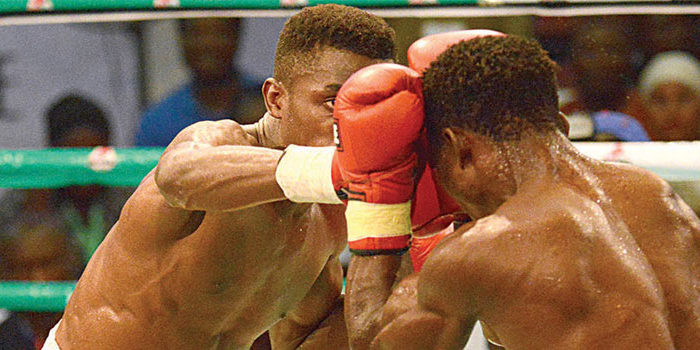 Boxers billed to fight at the GOtv Boxing Night 19 on Sunday have worked themselves into a war mood, as they conclude their training for the event, which holds at the Indoor Sports Hall of the National Stadium.

The nine-bout show will have in action some of the biggest names on the domestic boxing scene and two all-female bouts.

In separate interviews, the boxers boasted that they would see off their respective opponents with ease.

Babatunde, who takes part in the event’s headline bout, said he will crush his opponent, Eden Biki of Ghana, in their international welterweight challenge bout.

“I’m sure of victory and ready to make Nigeria proud. No Ghanaian will defeat me whether or not I’m fighting at home. Nigeria has always been bigger than Ghana and it will remain so,” he said.

Joe Boy, who is due to fight Tope “Berinja” in a national lightweight challenge bout, vowed to make light work of his opponent, whom he described as “baby boxer”.

“Berinja is a baby in this sport. I am not losing any sleep over our fight. He will regret agreeing to get into the ring with me. He will not last beyond the third round,” bragged Joe Boy.

“Real One” Oladosu, is convinced that his opponent will taste defeat for the first time in his career. Both face each other in a national lightweight challenge bout.

“My fans have nothing to fear because I’m ready to explode and put Rilwan in his rightful place on the canvas and turn him into the ‘Fake One,” said Ganiyu.

Skoro, the former ABU featherweight champion, who faces a daunting task against the all-action Agbaje, said he is unimpressed, let alone daunted, by the profile of his opponent, winner of the best boxer award at GOtv Boxing Night 16. The former champion said he plans to use the fight with Agbaje as a warm-up for his next fight.

“Esepo has been found a tough opponent by low quality boxers. I’m of the highest class and will show him exactly why,” ranted Skoro.

Agbaje, however, laughed off Skoro’s boast, branding the former ABU champion as over-the-hill.

“I don’t know how good he was, but I know that he is finished and his time is gone. In two rounds, he’d be gasping. I will then finish him off in the third or fourth round. He’s finished,” said Agbaje.

Other fights on the card include a national featherweight challenge bout between Kazeem “The Light” Oliwo and Tope “TP Rock” Musa.

Two female bouts are also scheduled for the event, with Rodiat Ibrahim challenging Rodiat Yusuf, and Adedeji Abiodun going up against Cynthia Ogunsemilore.

The best boxer at the event will go home with a cash prize of N1 million alongside the Mojisola Ogunsanya Memorial Trophy.