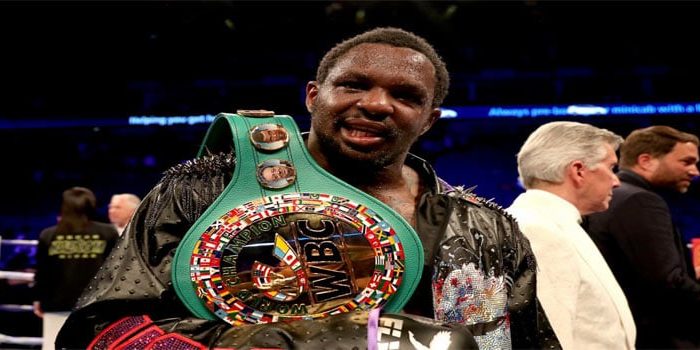 Last week, British heavyweight Dillian Whye was named the WBC interim heavyweight titlist and mandatory challenger to real champion Deontay Wilder. All of that is over now.

Whyte tested positive for a banned substance following his unanimous decision win over Oscar Rivas on July 20 in England. And now, the WBC issued the following statement:

An “A” Sample UKAD collected from Mr. Dillian Whyte in relation with his bout against Oscar Rivas yielded an adverse finding. In light of that adverse finding, and pending the outcome of the WBC’s own investigation and adjudicatory process, the WBC is provisionally suspending the WBC’s recognition of Dillian Whyte as WBC Interim World Heavyweight Champion and Mandatory Challenger of the division.

The WBC has notified Mr. Whyte and his team of the WBC’s suspension, and that it will afford Mr. Whyte the opportunity to present its position to the WBC at an investigative hearing which will take place at a place and time to be announced in the near future. Throughout its investigation and hearing, the WBC will afford Mr. Whyte and his team the opportunity to present any available information and materials, and any exculpatory evidence they might deem appropriate.