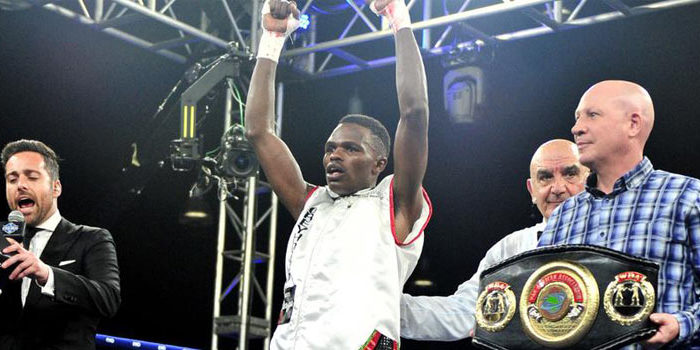 In an outstanding performance and against the odds, South African lightweight champion Ayanda “Greyhound” Nkosi won the vacant World Boxing Federation lightweight belt when he stopped the vastly more experienced former WBA interim junior lightweight champion Emanuel “Polo” Lopez from Mexico in the seventh round at the Portuguese Hall on Saturday night.

Nkosi (14-1, 8 KOs) had to use all his boxing skills to keep he marauding 29-year-old Lopez (30-12-1, 14 KOs) on the outside, who was stopped inside for only the fourth time in his long and hard nine year professional career.

From the opening bell, Lopez came in close and tried to fight in the pocket against the classy South African who had to use all his boxing skills to keep the Mexican on the outside.

Even though Lopez was in the fight it was not enough as the South African possibly won the first six rounds before a barrage of punches sent Lopez down in the seventh and when it was clear that the Mexican was in no condition to continue referee Ben Ncapi stepped in to wave the fight off.