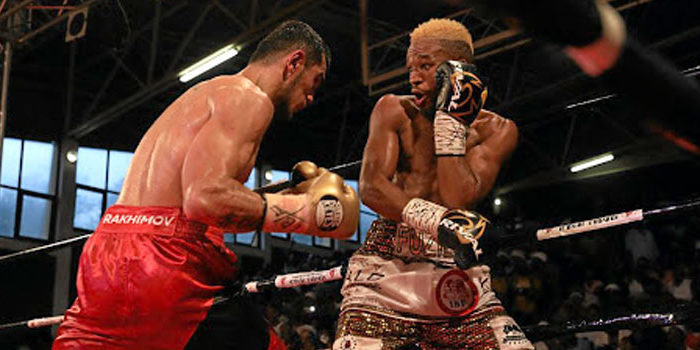 People who described themselves as his followers said the behaviour has impacted on his once blossoming boxing career.

The claims were made to Sowetan by a number of die-hard fans from the Eastern Cape where the Johannesburg-based fighter is born.

“Fuzile has over the years showed amazing tenacity, discipline and high level of focus. It is based on these qualities that we stand by Fuzile at this time of his growth after he was defeated in the 8th round by Russian opponent, Shavkhatdzon Rakhimov,” she said.

Fuzile and Rakhimov fought for the right to challenge the IBF junior lightweight holder, American Tevin Farmer, at the Orient Theatre last month.

“We dispute the lies peddled by his East London supporters. These lies are manufactured to hinder Fuzile’s growth as a boxer.

“It is unfortunate that while RAP and Fuzile are trying to analyse the last match, such malicious rumours could be spread,” said Nyatela.

“We wish to assure South Africa and all boxing fans that Fuzile is no womaniser and is not an alcoholic.”

Meanwhile, RAP and the boxing fraternity in SA await with bated breath for the IBF to respond to the promotions’ formal protest after Rakhimov’s handler Ruslan Agishev was caught on video administering “smelling salts” to the nostrils of the boxer in the comer before the beginning of round eight.

Any use of substance, including smelling salts, is banned in boxing with BSA regulations explicit about their prohibition.