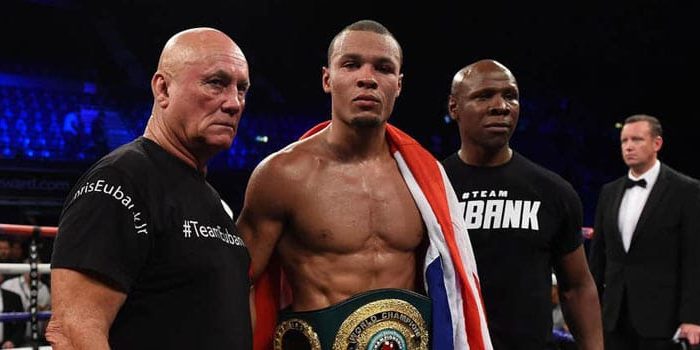 Middleweight star Chris Eubank Jr. and top contender Matt Korobov will square off in the co-main event on Saturday, December 7 live on SHOWTIME from Barclays Center, the home of BROOKLYN BOXING™, in a Premier Boxing Champions event. Eubank and Korobov will meet for the Interim WBA Middleweight Title.

Eubank is coming off a career-best win over British super middleweight rival James DeGale in February on SHOWTIME and will go down to the 160-pound class to take on Korobov, a southpaw who gave Charlo a tougher than expected test as a late replacement last December at Barclays Center.

Tickets for the live event, which is promoted by Lions Only Promotions and TGB Promotions, are on-sale now and can be purchased at ticketmaster.com and barclayscenter.com. Tickets also can be purchased at the American Express Box Office at Barclays Center. Group discounts are available by calling 844-BKLYN-GP.

“Chris Eubank Jr. vs. Matt Korobov is a high stakes showdown that makes Saturday, December 7 a tremendous night of championship middleweight action live on SHOWTIME at Barclays Center in Brooklyn,” said Tom Brown, President of TGB Promotions. “Chris Eubank Jr. is already a star in the U.K. and is poised to make a big splash in his U.S. debut, while Matt Korobov is eager to build on his impressive performance in a loss to Jermall Charlo last year. Expect fireworks as Eubank and Korobov look to steal the show and walk away the title on December 7.”

This will be the first time that Eubank (28-2, 21 KOs) has fought in the U.S. as a professional. Although he has competed at super middleweight, the 29-year-old from Brighton, Sussex in the United Kingdom will meet Korobov at his more natural weight of 160 pounds for the interim title. Since losing to George Groves in 2018, the son of British legend Chris Eubank Sr. has put together two victories, including the decisive unanimous decision over former super middleweight champion DeGale in his last fight in London.

“I’m ready to take the United States and the middleweight division by storm,” said Eubank.  “I’m excited to come down to 160 pounds where I naturally belong, and I don’t see anybody being able to touch me at this weight class.  America is where I learned how to fight as an amateur in Las Vegas and 13 years later I’m finally going to make my U.S. professional debut.  I can’t wait to show the fans in the U.S. that I’m the best middleweight in the world.”

The 36-year-old Korobov (28-2-1, 14 KOs) is coming off a majority draw against Immanuwel Aleem in his last fight in May, after serving notice to the middleweight division that he would be a threat when he lost a hard-fought decision to Jermall Charlo in December. Born in Orotukan, Russia and now living in St. Petersburg, Florida, Korobov was a late replacement and gave Charlo a tougher fight than many experts expected. Korobov had been riding a four-fight win streak before the Charlo fight, having previously lost a middleweight title fight to Andy Lee in 2014.

“I am more motivated for this fight than any other so far in my career,” said Korobov. “Against Jermall Charlo, I didn’t get the decision. In my mind, I won that fight at Barclays Center. This time around, I will leave no doubt against Eubank. This opportunity gives me a chance to right a wrong. Fans will see the best Matt Korobov on December 7.”