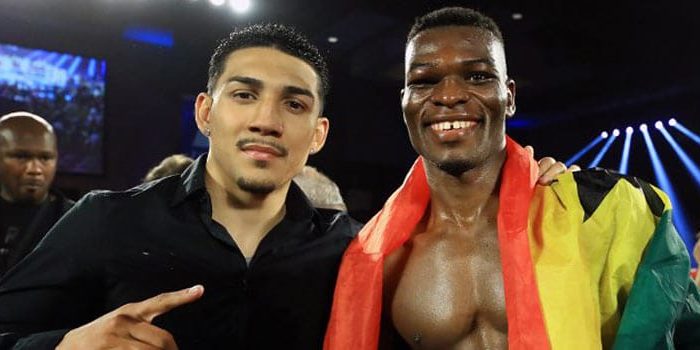 If he relied only on what he has read, Richard Commey would be left to believe that he’s the one fighting for the lightweight title he already owns.

In a lot of ways, it’s actually true.

The hard-luck veteran has grown accustomed to having to prove the doubters wrong and literally fight for respect, a fate which once again awaits his latest title fight as he defends versus unbeaten mandatory challenger Teofimo Lopez. The two collide on Dec. 14 live on ESPN from Madison Square Garden in New York City, with Commey (29-2, 26KOs) due to make the second defense of the title earlier this year.

So far, however, the sense is that he’s challenging for a title that has all but been handed over to Lopez.

“It’s typical of how Ghanaian and African boxers in general are treated,” Michael Amoo-Bediako, Commey’s longtime manager told BoxingScene.com of the unfair perception that continues to precede his countrymen in the pro ranks. “Some of it is part our own doing by not being professional enough.

“Most of it stems from a stigma which I have heard many times from many different promoters and that’s African fighters bring little or nothing to the table. Team Commey is trying hard to change that perception but it’s not made easier when Richard is being made to sound like the challenger and not the champion.”

Ghana’s Commey—who now fights out of the The Bronx—claimed the lightweight title with a crushing 2nd round knockout of Isa Chaniev this past February in Frisco, Texas. The bout aired live on ESPN, as did his first title defense, a one-sided 8th round stoppage of former lightweight title claimant Ray Beltran in June.

Lopez (14-0, 11KOs) survived his toughest test to date, scoring a hard-fought 12-round decision over Japan’s Masayoshi Nakatani this past July. With the win came the designation of being named mandatory challenger, though one that Brooklyn’s Lope was initially hesitant to accept due to in-house issues in need of resolution.

The 2016 Olympian—representing his parents’ Honduras—was given a month or so to get his house in order, as the IBF ordered the title fight in early August. The two sides agreed to terms, with Lopez and his team formally announced their officially signing a bout agreement to move forward with his first career title fight.

From there has come an unofficial coronation, as if Commey is the one fighting to regain the very title he will defend in December. Early odds have the 32-year old as a slight betting underdog versus Lopez, whom many outlets hailed as the 2018 Prospect of the Year.

“We find it disrespectful but it also motivates us as a team to work even harder,” admits Commey. “Come December 14th, all that hard work will come to fruition.”