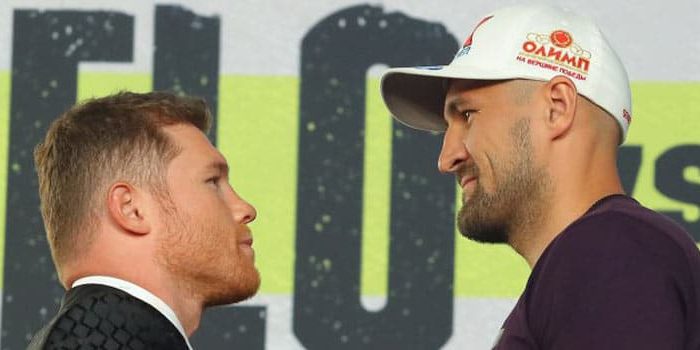 Canelo will jump up by 15-pounds to the light heavyweight division on November 2, at the MGM Grand in Las Vegas.

Canelo has never fought beyond the super middleweight limit of 168-pounds, when he jumped up to easily blast out Rocky Fielding for the vacant WBA “regular” title in December 2018.

When the two boxers went face to face during the press tour, Kovalev was considerably bigger than Canelo.

Some experts believe Kovalev is getting up there in years at 36-years-old. It was only a few years ago that Kovalev was viewed as one of the most dangerous fighters in the world.

But he’s suffered three defeats in the last few years, two of them by knockout, and was very vulnerable in his August win over Anthony Yarde. While he stopped Yarde in the fight, Kovalev also found himself in serious trouble during the fight and appeared to be on the verge of getting stopped himself.

Despite of all that, De La Hoya felt the decision to go with Kovalev was very dangerous – but he also sees it as a huge fight for the DAZN streaming platform.

“I didn’t recommend it, moving up two weight classes. He has to move up 15 pounds — that’s a lot of power and a lot of speed a lot of strategies that come into play. It’s not going to be easy; it’s going to be a difficult fight. But this is why DAZN is working — it’s bringing the biggest fights to consumers,” De La Hoya said to Yahoo Finance.

And speaking of DAZN, De La Hoya fully backs their vision of eliminating the boxing business model of pay-per-view events.

“DAZN is making waves and opening doors for fighters. It’s letting consumers know that they don’t have to pay a ridiculous amount of money to watch one fight. You can now watch over 100 events a year and pay just $99 a year,” De La Hoya said. “It’s great for business; it’s great to the consumer, and it’s great for the fighter.”