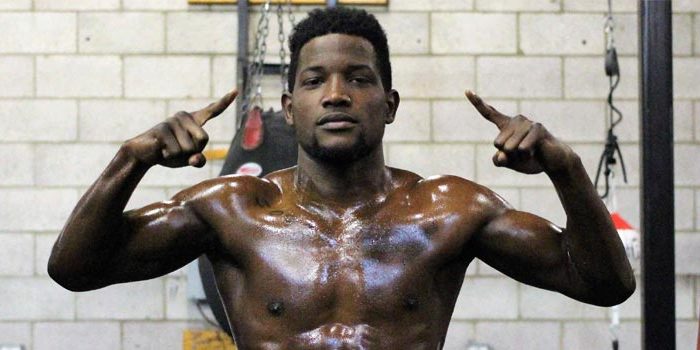 The all-action Gallimore replaces Terrell Gausha, who was forced to withdraw from the main event bout due to an injury to his left hand during sparring that required surgery.

Unbeaten heavyweight sensation Efe Ajagba will enter the ring against once-beaten Jack Mulowayi in a 10-round bout that replaces the previously announced Rau’Shee Warren vs. Emmanuel Rodriguez fight. Warren had to withdraw from the contest due to a right hand injury suffered during sparring.

Tickets for the event, which is promoted by TGB Promotions and King’s Promotions, are on sale now and can be purchased through Ticketmaster.com or at the Santander box office (Monday-Friday, 10 a.m. – 5 p.m., Saturdays 10 a.m. – 2 p.m.).

Orlando, Florida’s Lubin (21-1, 16 KOs) was one of the fastest rising contenders in boxing as he quickly raced to the top of the ladder to challenge Jermell Charlo for the WBC 154-pound championship in 2017. Following a one-punch, first-round stoppage to Charlo, the 24-year-old Lubin has rebounded with three straight stoppage victories of his own to regain his momentum toward a world championship. In February, Lubin became the first boxer to stop former champion Ishe Smith and is coming off a TKO victory over Zaharia Attou in his last fight in June on SHOWTIME.

“It’s unfortunate that Gausha had to pull out because I was really looking forward to that fight,” said Lubin. “Now I’m facing Nathaniel Gallimore, who is a very good fighter whose only losses are to top level guys. I’m expecting a very difficult fight, one that will be explosive for the fans, but one I know I will win.  It’s my time to show the world I’m ready to be back on top of the super welterweight division.”

The 31-year-old Gallimore (21-3-1, 17 KOs) most recently defeated Antonio Todd by decision in August to rebound from close decision losses to unified champion Julian Williams and top-ranked contender Patrick Teixeira in 2018. Born in Kingston, Jamaica and fighting out of Evanston, Illinois, Gallimore put together a seven-fight winning streak before the Williams fight, including knockouts of contenders Justin DeLoach and Jeison Rosario.

“I’m approaching this like any other big fight that was in the works for a long time,” said Gallimore. “I’ve been waiting for this moment in my career for a while. This is a steppingstone that can take me where I want to go. Lubin’s a pretty good boxer-puncher. He was on the rise for a moment and I knew about him coming up. It’s going to be a great fight. I’ll make any adjustment in the ring to capitalize on what I need to do to be victorious that night.”

Nigeria’s Ajagba (11-0, 9 KOs) most recently passed the toughest test of his professional career when he defeated fellow 2016 Olympian Ali Eren Demirezen by 10-round unanimous decision in July. The 25-year-old Ajagba gained widespread notoriety in August 2018 when his opponent, Curtis Harper, walked out of the ring after touching gloves to start the first round. Ajagba won the fight without throwing a punch as Harper was disqualified. Living in Stafford, Texas and training with Ronnie Shields, Ajagba has steadily increased his competition and added knockouts wins over Amir Mansour and Michael Wallisch this year.

Fighting out of Antwerpen, Belgium, by way of the Democratic Republic of the Congo, Mulowayi (7-1-1, 3 KOs) will make his U.S. debut on October 26 in a pro career that dates back to 2015. The 32-year-old was unbeaten in his first seven pro fights before losing a narrow majority decision to Herve Bubeaux in a bout for the Belgium heavyweight title in May. He rebounded to defeat Artur Kubiak in July heading into his fight against Ajagba.