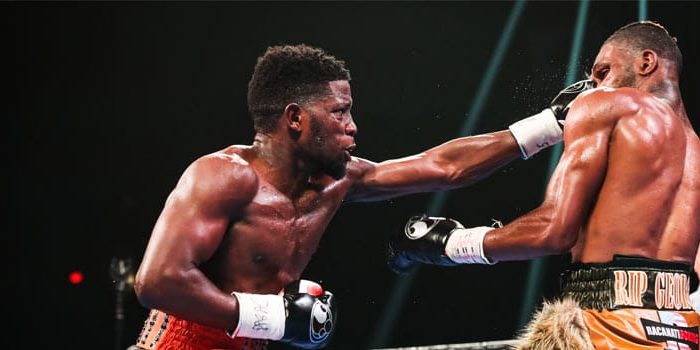 Lubin (22-1, 16 KOs) won his fourth straight fight since a knockout loss to Jermell Charlo in a title challenge in 2017. The 24-year-old landed 42 percent of his power shots en route to the wide decision, scored 99-91 by all three judges.

The southpaw relied on a suburb left hook, attacking from a variety of angles against the durable Gallimore (21-4-1, 17 KOs) as he improved to 4-0 since beginning to train with southpaw specialist Kevin Cunningham.

“I had a tremendous training camp thanks to Kevin Cunningham,” Lubin said. “At first we had Terrell Gausha but he fell out due to his injury. I appreciate Gallimore for stepping up to the plate. He gave me a tough fight and I appreciate it. We gave the fans what they wanted. I measured him. I just timed him and I was able to land my power shots.

“Kevin is a real strict trainer and he’s a southpaw specialist. We’re just improving our game every camp. I definitely want Jermell Charlo again. My goal is to get revenge.”

Cunningham was pleased with his pupil, who was pushed past the fifth round for the first time in more than three years.

“He’s always been a hell of a fighter and I just wanted to fine tune and refine the skill set,” Cunningham said. “He can do everything that you can teach. He’s the total package. He’s got power, he’s got speed, he’s got footwork. He’s more than a brawler. He’s a skillful fighter with power.

“He’s ready for all the top guys in the division. The guys with belts are what he wants.”

Easter (22-1-1 14 KOs), who lost his lightweight title in a unification with Mikey Garcia in 2018, was matched for his first fight a super lightweight against one of boxing’s most aggressive, come-forward fighters and the result did not disappoint. Granados charged forward from the opening bell, pressing on the inside against his rangy, 5-foot-11 opponent. In the first half of the fight, Easter pocketed rounds while fighting from a distance, leaning on his speed to win the first four rounds on all three judges’ scorecards. But the fight seemed to change tides at the midway point, with Granados able to force the bout to be contested at close range. Rounds seven through 10 featured tremendous, back-and-forth exchanges and the more active Granados seemed to get the better of the exchanges.

“This was a hell of a test for me at 140 and I felt strong. I’m not calling out anybody specifically, but you know there are champions in this weight class and I’m coming for all the belts. Line ’em up.”

One of boxing’s most reliable action fighters, Granados (20-8-2, 13 KOs) threw more punches and connected more and was once again frustrated with a decision that did not go his way.

“I’m tired of the same old story. It was clear that I controlled the fight. He never had me hurt. That was embarrassing.

“I can’t control the judging. It’s very frustrating. I have a dream to be a world champion and it just seems like it’s not cutting out for me. But I have the heart of a champion and I’m not giving up.”

In the opening bout of the telecast, undefeated Cuban heavyweight Frank Sanchez pitched a shutout against Jack Mulowayi, winning a 10-round unanimous decision scored 100-90 by all three judges.

Sanchez (14-0, 11 KOs) was the more active fighter from the opening bell, targeting the body against the defensive-minded Mulowayi (7-2-1, 3 KOs). The 27-year-old Sanchez, who was taken the 10-round distance for the first time, threw over 250 more punches than his opponent.

“My opponent didn’t really want to fight, he just wanted to fight dirty,” Sanchez said. “So all I could do was give him some lateral movement. It’s difficult when someone doesn’t want to engage. We wanted to touch him down, touch him up high. But once he got touched, the guy just tried to tie up.

“There was no problem going 10 rounds. I’m in great shape and I’m ready to fight again as soon as possible. I showed my technical superiority tonight. All the heavyweights better watch out.”

Two-time super featherweight world champion Gervonta “Tank” Davis was interviewed during Saturday’s telecast as he continues to train for his lightweight debut December 28 on SHOWTIME from State Farm Arena in Atlanta. The explosive Davis, who will fight Yuriorkis Gamboa for the WBA Lightweight World Championship, continued to call out the top fighters when he spoke with host Brian Custer.

“I’ve heard all these guys calling me out, I don’t want to sound cocky, but I am the cash cow at this weight class,” Davis said. “Me and Leo Santa Cruz are going to fight in 2020.”